Well, somehow it’s managed to become Tuesday again without my noticing it. I hate it when it does that.

I spent a lot of yesterday reading – which will come as no surprise to most of you, I’d wager – and I’m finding myself engrossed by China Miéville’s ‘Kraken’. Like all of Miéville’s novels, this one is so imaginative that it leaves you breathless as you read, asking yourself ‘did that just happen? How did that just happen?’ The plot asks us to imagine that someone has stolen a massive specimen jar from London’s Natural History Museum – a specimen jar which contains the preserved body of a giant squid, Architeuthis. The jar is so large that it seems impossible, at first, to imagine how (or why) it has been taken, but it soon starts to become clear to our protagonist, Billy Harrow, that strange things indeed are afoot. He is faced with a succession of strange and creepy Londoners on his quest to find out what happened, and some of these characters are among the most interesting I’ve ever met. I’m particularly fond of Collingswood, the smoking, foul-mouthed and wisecracking young PC (who is also gifted in extraordinary ways) who begins to crack the case. I’m not finished the book yet, but I have enjoyed what I’ve read so far. Miéville’s style can sometimes be complex, with a lot of neologisms and complex (and unexplained) jargon which we just have to do our best with; it’s a bit like jumping from one stepping stone to another across a wild, rushing river. It’s worth the effort, though. The setting for ‘Kraken’ has been compared to Neil Gaiman’s ‘Neverwhere’, and I can see why – it’s about an alternative London, it’s peopled with strange and weird creatures and magic crackles between the paving flags of the City. I love ‘Neverwhere’, and I do think ‘Kraken’ borrows some ideas from it, especially the fact that it also features a pair of sickeningly evil characters who go about together, one of whom is silent and the other extremely talkative – reading Miéville’s Goss and Subby is the same as reading Gaiman’s Mr Croup and Mr Vandemar. But, that said, I definitely have room in my heart for both these books.

Reading it has set me off thinking about the Kraken again. I say ‘again’ because I used to be obsessed with it as a child. 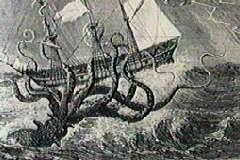 I first came across pictures like this one in books and encyclopedias when I was very young, and I never quite shook the fascination with these gargantuan kings of the sea. I used to imagine the heart-shredding terror of being on board ship as tentacles the size of giant redwoods started to wrap around the vessel, and the sheer helplessness of knowing there was nothing you could do about it. I tried to picture the Kraken and the Whale, locked in their eternal combat, and even tried on several occasions to draw my own version of the battle between these two sea-giants. It has always interested me, so much so that when I first tried my hand at writing a book, over a decade ago now, I featured the Kraken as a character. Or, at least, I kept mentioning the Kraken all the way through the book – but he/she/it never actually made an appearance. This glaring omission did not occur to me until I’d finished the book, and was reading back through it. It made me wonder how on earth I’d managed to bring one of the most compelling creatures in fiction into this story of mine without actually remembering to feature it at the story’s conclusion.

There may be a good reason why this story has never seen the light of day.

Some years later, I started a new story, also featuring the Kraken, but I haven’t yet managed to finish this one. It’s on the back burner, and as soon as I have time to get back to it, I will. Reading Miéville has renewed my interest in the Kraken, and it has also reminded me of the lesson I learned all those years ago – don’t keep mentioning something in a story if you have no way to bring it in, properly, to the plot. It’s like the dramatic principle described by the playwright Anton Chekhov – if you feature a loaded gun on stage in Act One, it must be fired by Act Three; if not, it has no place on the stage to begin with. I hadn’t intended to create a huge red herring through my (mis)use of the Kraken in my first book, all those years ago – it was merely a rookie mistake, but a valuable one. I promise to feature the Kraken the whole way through my new story – may I be dragged beneath the waves by a giant tentacled arm and drowned if I don’t!

As for the weather – well, I’ve learned a lesson in self-pity lately, all because of the weather. I’m really beginning to feel the needle-teeth of winter here, and people are starting to speculate about whether we’ll have a ‘hard’ winter, i.e. whether the very bad snow and ice we’ve seen in recent years will make a comeback. I was beginning to feel very sorry for myself at the prospect of facing into that sort of hardship, when I turned on the news last night and watched the coverage of Hurricane Sandy. I was taken aback by the scale of the thing, and a friend of mine (whose parents and other relatives live in Connecticut) told me that her family have had to furnish their basements and bring their generators down there in order to prepare themselves for the next few days. Apparently, as ‘hardy New Englanders’, none of this is new to them – but I felt very small for being afraid of the sort of weather we’re likely to get here. It reminded me how lucky I am to live in Ireland!

So, I hope you have a snow-, ice- and Kraken-free day, wherever you are. And if you’re in any way affected by the Hurricane, my thoughts are with you. Fingers crossed it won’t take too heavy a toll.