Last night, I stayed up late. I wasn’t tired at the right time, again. It seems like my brain is just ready and able to work at night, and there’s not a lot I can do about that, I suppose. My husband went to bed at a reasonable hour like a proper human being, but I stayed up. I wrote two flash fiction stories and found a competition in which to enter them. I read some websites and blogs, I thought about my writing, and I had a rummage through my old files. 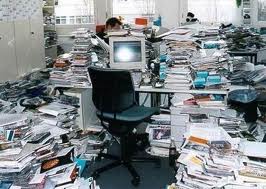 I felt a bit like this when I started looking…
Image: accountingweb.co.uk

It was as I did this last bit, this rummaging through files that, maybe, should have been left alone that I came across a partial version of my first ever attempt to write the story that would become ‘Tider’. I remembered it as being juvenile, embarrassing, and stupid. I remembered the tone I’d used as being ‘twee’ and childish, more like Enid Blyton than anything. I thought I’d lost the file, or deleted it, many years ago.

But I found it, and read it again last night, and realised that it’s not as bad as I remembered. It’s actually all right, and the story outline I’d done is, in some ways, better than ‘Tider’. It was a bittersweet realisation.

The version I found isn’t the full one – I know I did have a longer story that went further into the family’s history, but that one must have fallen between the digital cracks. Like everyone, I’ve had several computers die before my very eyes. I’ve had several house-moves where USB keys have, no doubt, been left behind in secret nooks and crannies. It’s inevitable that stuff will have gone missing, though I do try to take better care of my words these days. The longer one has clearly gone the way of all flesh, and I’m going to take it as being a good thing.

But finding this file has shown me something important, and that is: don’t always discount your early work, assuming it’s inferior to the work you’re doing now. Nine times out of ten, it’s bound to be full of rookie mistakes – showing instead of telling, clichés, bad continuity, stilted storylines, pointless characters and reams of excess description – but sometimes, it will surprise you in a good way.

So, I’ve decided ‘Tider’ is getting a major overhaul, and I’m incorporating the original seed of the story into the version I’ve created over the last few months. There were some good ideas in the original, things I’d completely forgotten about, but things that could actually work very well. The protagonist had a best friend whose father was dying, which lent urgency to their quest to try to extend his life; the ‘technology’ was different, but in some ways it seems better than what I’ve written over the last few months. I will keep my Maraika as a teenager – my original story had her named Zara, and she was much younger – but I’m in love with Maraika now, and I can’t let her go. The original Zara had an older sister named Estrella, so perhaps I’ll incorporate both those characters into the Maraika I’ve come to know so well.

I should be glad, but in a way I wish I’d found this file – or, more correctly, that I’d thought to look for it – before I’d started ‘Tider’. But then, perhaps it all happened the way it was supposed to. ‘Tider’ is what it is; it’s not perfect, but now I have a way to make it better.

Also, it’s Friday. When is that ever bad news?

In Ireland, today is St. Brigid’s Day. She was my favourite saint as a little girl, mainly because she’s all wound up with the Celtic goddess Brigit. I liked that idea, that you could be powerful and important in two completely different ways and in two pantheons. So, happy goddess Brigit day! I’m welcoming the Spring both literally and mentally today. It’s time to start thinking about things in a new way, and realising that everything must grow and change – stories can be reborn – and that it will all work out for the best.