For some reason, several people in recent weeks have taken the time to tell me how brave they think I am. I presume this means they think I’m brave for putting my dreams on the line and for following the impulse to write, or perhaps for entering competitions and submitting pieces of work for publication.

I don’t feel brave, though. Not at all. I feel like the biggest quivering chicken in the history of the world. Surely, if I was brave, I’d feel more like I was channelling Queen Boudicca instead, taking on the might of the Romans with little besides a bow and some facepaint. Isn’t that how it works?

It’s hard to feel brave when you have to force yourself to check your email in case there’s a note of rejection in there. It’s hard to realise a piece you’ve written is really not very good – and it’s especially hard to realise this after you’ve submitted it. Some of the stories I’ve entered into competition over the past while have been catalogues of rookie mistakes, and I’m learning the wisdom of the saying ‘measure twice and cut once’ – or maybe, in this case, ‘read twice before submitting’! I don’t feel brave because I’ve started this process; I simply feel like an amoeba in a very big pond, realising just how much I have to learn. 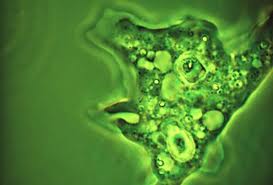 This is me. Hello!
Image: resilience.org

I feel like what I’m doing at the moment is an apprenticeship, something everyone who wants to write has to go through eventually. I’ve done things in the past which I’ve needed bravery for, sure – giving lectures in front of hundreds of people, for instance. Taking an oral examination. Going up in front of a funding board made up of six senior male professors, and arguing for the validity of the research I was doing at the time. I still can’t quite believe I’ve done all these things, because even the memory of having done them makes me quake in my boots. All those things made me sick with fear before I did them, and I felt like I’d accomplished something when I’d managed to get through them.

Submitting stories for publication feels more like a compulsion, though – and, like any compulsion, it can sometimes be impossible to resist. I feel like I have to submit something I’ve written, perhaps before it’s ready, because the urge to do it is overwhelming. It’s only afterwards when I realise ‘perhaps that piece could have done with a bit more maturation time.’ But it’s too late, at that point, to retract it. It’s almost like my enthusiasm gets the better of me and a certain recklessness gets into my blood. So, off the story goes. Submit in haste, repent in leisure!

This isn’t to say that the pieces I’ve submitted haven’t been my best effort at the time. I feel like there’s something of value in everything I’ve entered into competition, and I’ve done my best. But it’s the same with everything; after the fact, you wonder if you could have done better, and what you should have changed to make the piece stronger. But if you followed that logic to its extreme, you’d never submit anything. You’d spend the rest of your life tweaking your first piece of writing until it’s beyond recognition, and nobody else would ever read it. The process of writing and submitting and being rejected is a terrible crucible, but it’s absolutely necessary. I know I have to go through this process of learning in order that something I submit, somewhere, someday, might meet with approval.

So, I don’t feel like it’s brave, as such, to send things away for other eyes to read. It’s horrible and I don’t like to do it – but I don’t think it’s the same thing as being brave. However, there’s a certain amount of facing your fears involved in living through the days afterward, when you’re waiting to hear the results. You may never hear how you got on, of course. There are a lot of voices clamouring for attention, and I know it will take a long time before my words will warrant any recognition. The process is somewhat analogous to shouting into a hurricane – your small contribution is swirled up into the whole and becomes lost. But the value of it still lives inside you. You know that you tried, and did your best, and over time the process gets easier (hopefully, at least.) In my case, it’s even true to say that every submission makes me feel a little better about myself – at least, until the doubts start to creep in. But I don’t think doing what you have to do is brave, really. This is a process I have to go through, and I’m just doing what I must. It does make you feel vulnerable, and it’s not entirely pleasant. But, given the choice between doing what I’m doing and trying to live any other life, I’d happily choose what I’m doing.

Maybe that’s what being brave is all about, though – taking a chance on something even though you’re not sure what the outcome will be, and hoping for the best. In that case, every one of us is brave. 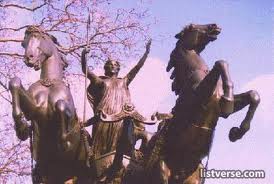 I’ll never be as brave as this lady, though. Let’s hope it’s never up to me to stop the onslaught of a tyrannical Empire…
Image: listverse.com