Behold the loveliness of this book cover: 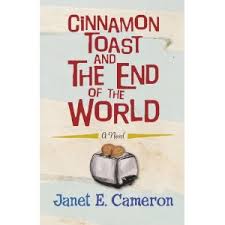 I read this book over the long weekend, and it wasn’t a second before time. I’ve been waiting for it to come out for several months (it’s so hard to wait for books!), but it was more than worth it. It’s the kind of book which turns its reader into a really rude so-and-so, a person who’s unable to talk to anyone or take part in anything that doesn’t involve their faces being stuck into their book. So, apologies to anyone who might have tried to speak to me while this book was anywhere within grabbing distance. I probably didn’t hear you.

The book (Janet E. Cameron‘s debut novel, ‘Cinnamon Toast and the End of the World’) is set in 1987, in a small town in Nova Scotia. We meet Stephen Shulevitz, a boy who spends his early years living with his parents in a hippie commune, dealing with their unusual relationship with one another as well as with him. At the age of eight, he moves to small-town Riverside with his mother and begins to attend regular school, where he suffers due to his perceived ‘snottiness’, or superiority, over the other children. Of course, Stephen has no intention of elevating himself above his classmates. He simply sees the world differently, has been educated differently up to this point in his life, and finds it hard to adjust. His parents separate, and we read of the sometimes poignant relationship between Stephen and his mother. There is a lot of love between them, but on occasion it fails to find its way to the surface. The book basically takes us through Stephen’s life as he negotiates his family difficulties (including re-establishing a relationship with his estranged father), makes friends, makes mistakes, deals with his Ukrainian, Russian and Jewish heritage, and falls in love. And all this before he’s even finished school.

The book begins with a scene from Stephen’s teenage years on the night he realises he’s fallen in love with the ‘wrong’ person – this is the ‘End of the World’ of the title. The story flips gently back and forth between the pages of his life as he tries to explain to us how he got to this point, and why, exactly, he fell in love. The book is narrated by Stephen himself in a very effective ‘memoir’ style; at times, he feels he’s ‘left out too much’, and he’ll go back to fill in the gaps. We are brought from the ‘present day’ back to important scenes from his childhood – the day his father left, the day he meets his beloved (and the circumstances behind their becoming friends in the first place), among many others – which gives a very realistic feel to proceedings. Despite this, the story doesn’t flinch from telling us all about Stephen’s mistakes. When he messes up, he’s self-aware enough to tell us about it without attempting to explain it away. One particular episode, when he (almost without meaning to) betrays his best friend, had me in tears. I wasn’t sure if it was because I felt terrible for Stephen, or because I could relate so much to his friend (Lana); perhaps it was a bit of both. In any case, it was moving and real and completely believable. Despite the fact that it’s set in Canada (and there are significant differences between their ‘High School’ experience and ours here in Ireland), the emotions, insecurities and relationships were so effective that the story immersed me completely. For the length of time I spent reading this book, I was an awkward Canadian teenager in the 198os (despite the fact that the real me in 1987 was a greasy kid wearing glitter-boots, a sideways ponytail and a Jason Donovan t-shirt).

The characterisation in this book is excellent – even the minor characters are memorable. I found it interesting that the most fleshed-out and ‘real’ character in the story is the person with whom Stephen falls in love. This person’s failings and flaws, as well as their heroism, protectiveness and kindness are all described with such tender touches that by the end of the story I was a little bit in love with this character myself. It surprised me, because the love-interest is full of anger, and at times the hatred and darkness they exude oozes out of the pages. At one point, they hurt Stephen very badly and his life is put at risk, but despite this, Stephen’s love doesn’t waver and, as a result, neither did mine. I understood the character’s reactions, and I felt I knew where they were coming from – product of a broken home, left to take care of a much younger sister, overlooked by teachers and allowed to fall through the cracks at school – so their rage seems natural and even understandable. I was left feeling sympathetic and sorry for this character, as well as full of admiration for Janet Cameron, the book’s author – how right it is that the person into whose psyche we are given the most insight is the one with whom our narrator is in love. Who else does he know more deeply?

I enjoyed everything about this book, from its structure to its narrative voice to its evocation of a world at once totally alien, and completely familiar, to my experience. I have been the character of Lana, also in love with the ‘wrong’ person, feeling too large for comfort, not quite fitting in with the other girls; I felt such affinity with Stephen’s mother Maryna, dealing with her own memories of a hard childhood with an unforgiving father and the cultural baggage she carries, not because I’ve experienced this myself but because Ms. Cameron describes it so well. I admired Stephen for his bravery and constancy, and I hated his father, Stanley, for the way he treated his son. The book deals unflinchingly with drug use, AIDS (particularly the fear felt around the topic during the 1980s), sexuality, self-harm and suicidal thoughts, and rape – so in some ways, it may not be for the faint-hearted. But if you like books which touch your heart and make you think, books which evoke a time and place so skilfully that opening them feels like stepping into a time machine, and books which deal with the Great Universal of unrequited love, then this is a book worth reading. 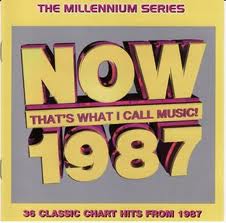 *In the interests of full disclosure, I feel I should say that the author of this book is someone with whom I communicate on Twitter; this has not affected the impartiality of my review, however.

4 thoughts on “‘Cinnamon Toast’ and a Book Review*”