Did you see this wonderful news story yesterday?

For those who don’t do clicking, or who can’t click on links, I’ll tell you what I’m talking about. Yesterday on Twitter someone linked to a story about a novelist who has just published his second book, and who is writing the final part in his trilogy about a pair of magician brothers. The books explore dark magic and the twisty intrigue of secret magical societies, as well as the complicated relationship between the brothers. The stories sounded amazing enough as they were, but when it emerged that the author is nine years of age (yes – nine), well. You could’ve knocked me down with a feather.

Joe Prendergast, for it is he, is far from being the only author who has been published at a tender age. Irish author Claire Hennessy, for instance, was first published while she was still at school, and Catherine Webb had written five books by the time she turned twenty – and all of them were brilliant.

Both Claire Hennessy and Catherine Webb are still writing, and have carved out successful careers for themselves in the literary world. Hopefully, then, if young Mr. Prendergast wants a career as a writer when he grows older, he should have no problem achieving that aim. 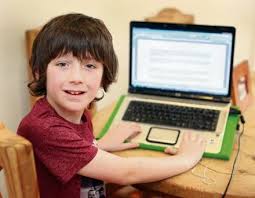 The young and talented Mr. Prendergast himself!
Image: independent.ie

It’s wonderful to see this young author meeting with the support and encouragement he needed to finish his series of books, and not only that, but to see them through to publication too. It goes to show the brilliant things that can happen when a person with talent, determination and a great idea for a book meets the technology to get it out into the world; Joe was first spotted by an online publisher, who championed him and made his books available through their website. There are also fantastic sites like Wattpad, used by millions of young people all over the world, allowing them to write for the sheer joy of it and share stories with one another with ease. Sometimes I wish these things had been available when I was young and at school. I’m not saying that anything I was writing at that stage was worth reading (not by a long shot!) but it would have been such a thrill to be able to publish work to a website, to see your words somewhere outside your own head, and to imagine what it might be like to be a published author.

Then again, I was a terribly shy and awkward teenager. I’m not sure that I’d have availed of a service like Wattpad, or even WordPress, as a young person; the very idea that other people might be able to read what I’d written might have thrown me into a fit of nerves so serious as to be life-threatening. I was certainly writing – prolifically – as a nine-year-old and all the way through my teens, but it’s probably a good thing that nobody ever saw a word that fell out of my fevered brain. Then, on the other hand, if I’d had the chance to share my words with the world via the internet as a younger person, perhaps I’d be winning literary prizes right now and be working on my thirty-fifth book – the earlier you start to get feedback, the stronger your work will become, of course. It’s a bit of a pain to be only beginning the whole process now, as a person in her *cough* thirties. I can only imagine how much stronger my writing would be if I’d been doing it seriously for twenty years or more at this stage.

Then, I guess it’s better late than never. Hopefully, I’ll be able to make up for lost time in the years that I have left to me. And if you’re a person who wants to write (no matter what age you are), then let this story be a lesson. You’re never too young, or too old, to get your ideas out there and share your words with the story of the world. There’s no excuse these days!

Today, April 23rd, is also an important day in the world of books, in case you didn’t know already. As well as being the birth (and death) day of Shakespeare, and the birthday of Cervantes, it’s also World Book Night tonight.

Designed to encourage and foster a love of reading among people who may not otherwise take up an opportunity to pick up a book, World Book Night is a fantastic endeavour. For, of course, if we’re going to encourage people to write, we’ll need to recruit a whole new batch of readers, too. I don’t think there’s anything more valuable that we can give to our children than a love of reading and a desire to create, share and consume stories. I’d love to see a world where reading, and a love of reading, came to people as naturally as breathing. I have a suspicion the world would be a happier place if this could be a reality.

So – start early, whether you’re reading or writing; ideally, do both. It’s never too late to start, and it’s always worth giving it a go.