In conversation with my husband last night – after a long, long day for both of us – the topic of positivity and optimism came up. I described to him how hard it is, at times, to keep my thoughts positive and focused, and how easy it feels sometimes to let myself sink under the burden of ‘Why bother? This whole stupid writing dream is never going to happen, anyway.’ My husband, as he is wont, made a statement of such profound wisdom that I felt the need to share it with you all this morning.

Being positive is a safety net, he said. Think about that for a while.

Isn’t that a brilliant thought? Positivity will catch you, like a safety net. What he means is, of course, if you keep a positive outlook, little setbacks (like rejections, failed story-ideas, missed deadlines) will somehow not seem so bad. Being positive helps you to take things like that in your stride, and every time you choose to be positive in the face of a setback, it gets easier. There’s an added benefit, too – every time you choose to be positive when something relatively minor goes wrong, the easier it gets to stay positive when something more serious goes wrong.

Having said that, nothing serious (thankfully) has yet gone wrong for me, really. Things are, more or less, going to plan. But as anyone who’s been alive for longer than a few months is aware, nothing ever goes to plan for long. 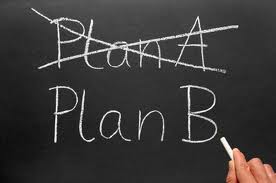 Habits, like plans, are easy to form, and hard to break. This is not news. For example, I’m a person who’s notorious for chewing the inside of my mouth; I’ve done it all my life. Even though I know it hurts, it can lead to lacerations, and all that, it’s a habit I can’t break. I do it without even thinking about it. Heck, I’m probably doing it right now. Of course, this is a bad habit, and one I could easily do without, but because people are complicated little things, it’s always easier to form bad habits than good ones. They do have something in common, though – the more often you repeat an action (whether good or bad), the more habitual it becomes. The same thing applies to mental habits, and particularly to positivity. I do believe positivity is a mental habit, and I believe it can be practised and learned and encouraged to become habitual. It just takes a huge amount of effort, particularly for a person who isn’t naturally positive – i.e. me.

My mother spent my entire childhood telling me to develop PMA, as she called it – Positive Mental Attitude. I knew she was right, and what she was saying made sense, but for some reason I could just never do it. I allowed myself to be beaten by pessimism time after time, making silly choice after silly choice, giving up on dream after dream. I’m not sure if it’s because I’m older, or more secure in my life and myself, or because I’m doing something I really, truly love and want to devote my life to, but being positive now seems like the only logical thing to do in a situation like mine. Mam, if you’re reading this: I finally learned what you were trying to teach me all those years. And – you were right.

As well as the benefits of trying to think positive, and taking the optimistic view in every situation, there’s also this to think about: the more often you succumb to negative thinking, and pessimistic choices, the easier that becomes, too. Every knock-back you get, if you’re in a negative frame of mind, puts you down so much that you just don’t have the time or energy to fully recover from it before the next one hits you. Then, you get put down again, and you sink even lower than you were before. And so on, and so on, until you reach rock bottom, and you’ve no further to sink. Negative thinking, like positive thinking, is a cumulative thing; every choice builds on the one before it, and forms the foundation for the one after it.

This is easy to understand in an abstract sense. It probably sounds quite logical (hopefully) when divorced from a context. When you’re going through something crushing or complicated or upsetting, of course, it’s not so easy to keep your thoughts positive. But, if you’re anything like me, once you start trying to do it, and you let the light in just a little, it begins to get easier and easier, until eventually – I hope – it will become effortless. Imagine what you could achieve if you just believed that you could do anything that came your way, and that you’d give it the very best shot you could. If you were enthusiastic about challenges, and met them with a smile on your face, instead of fear in your heart.

I hope it helps to remember my clever husband’s phrase – positivity is a safety net. He’s right, of course. Start small with positive thinking, and see if it doesn’t bloom throughout your whole life. It’s worth a try! I’m by no means there yet – positive thinking is still a conscious choice for me, a conscious turning away from the downward-pulling power of the negative. I hope eventually it will be instinctual.

When the knocks really start rolling in, and the challenges start mounting up, we’ll see how much progress I’ve made. I’m going to practise as much as I can in the meantime! And, of course, if I can do it, so can you.