Because this is *totally* my reading nook. A hammock. In my sunny, warm, Irish garden.
Image: thewomancondition.blogspot.com

Time, I think, to do my bit to promote reading by delving right into another book review post. Today, it’s the turn of ‘Level 2’, by Lenore Appelhans. Here it is: 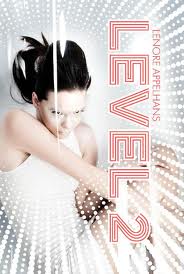 I’m sure you’ll agree that this book has a brilliant cover. In fact, the cover design was one of the things that made me want to read it; I saw it on Twitter, and other social media sites, before it ever hit the shelves. I learned that the author was a well-known blogger (check her out over at Presenting Lenore), which also piqued my interest. So, I was looking forward to reading this book long before I ever got my grubby little paws on it.

The story outline is pretty intriguing. The book is about a teenager named Felicia Ward, who dies just before her eighteenth birthday. As it opens, we don’t know what happened to cause her death, but it hardly matters – the book throws us right into a radical reimagining of the afterlife so different from anything I’d ever read or heard of before that it was immediately arresting.The Level 2 of the title is a ‘between-world’, one through which we must pass after death, and before we enter heaven, or Level 3.

Felicia, and the other deceased young women (or ‘drones’, as they’re called) who occupy her ‘hive’, exist in sterile-seeming chambers where they spend their time accessing memories of their lives. They can, as well as watching their own memories, rent and watch the memories of others; there is, of course, a cost for this. To access the memories of other people, they must first build up a level of credit, earned from other drones renting their memories and watching them. The memories can be given ratings up to and including ‘5 stars’, depending on their content, so popular memories soon rack up huge viewing rates. It’s a vision of the afterlife which may sound very strange to someone who has no familiarity with YouTube, for instance, but to the teenage audience at whom this book is aimed, the concept behind Appelhans’ idea is second nature.

I did wonder a bit at first what the purpose of Level 2, as a place, was. The norm, for an afterlife, is to move on, to come to terms with your death and reach a place of peace. But spending your time reliving your memories, particularly your most cherished ones, seems a strange way to accept your own death and allow yourself to pass on to the next level. However, Appelhans makes interesting use of this as her book unfolds – the souls in Level 2 are being held there for a purpose, and they are being encouraged to live and relive their cherished memories for a reason, too.

So. ‘Life’ (or, afterlife) continues normally for Felicia until the day the girl in the next hive (Beckah) disappears. Beckah is one of the only friends Felicia has in Level 2, and so her disappearance causes her a huge amount of upset – this is compounded when it emerges that Felicia is the only person in the hive who remembers Beckah at all, and the fact that she vanishes upsets nobody but Felicia. She begins to wonder whether someone has removed Beckah from the ‘net’ of interconnected memories shared by the hive, and why – in that case – Felicia’s memories have not been affected. Just as she is attempting to come to terms with this, a breach appears in the wall of the hive, and a figure steps through – a figure from Felicia’s past, who tells her she must come with him. He is in possession of information which he knows Felicia desperately wants, and leaves her little choice but to leave the hive.

This is a book of two halves. I really enjoyed one half, and I was ambivalent about the other. The sections where Felicia accesses her memories, and the picture she gradually paints of her life, her experiences, her fractious interaction with her family, her relationship with her deeply loved boyfriend, are fascinating. She was romantically involved with a boy named Neil, a deeply religious and honourable person, while she was alive. Neil is painted as a little too perfect, but this is probably as a consequence of our only knowledge of him coming from Felicia’s memories. Through her memories, we also come face to face with Julian, a boy about whom Felicia has complicated feelings – he evokes a sense of dread and fear in her, but her best friend Autumn falls for him in a serious way. Autumn’s fate at the end of the book, and Felicia’s actions in the weeks leading up to it, are genuinely gripping – even shocking – and it is this story, the story of her life, rather than her afterlife, which I found wonderfully well-written and engrossing to read.

It’s the sections in the hive, and the uncovering of the larger plan involving the girls in Level 2, and the role of the figure who unexpectedly turns up in Felicia’s life just as her friend Beckah disappears, which I found ill-conceived, hard to imagine, and – frankly – a little bland. The book devolves into a toothless chase around the afterlife, where people with the skills to manipulate the architecture of Level 2 with their minds find they can open doorways, access convenient memory chambers, and keep track of other people by mapping their brainwaves, which takes away any sense of urgency or drama surrounding the whole thing. I found this section of the book difficult to keep in my mind’s eye, because it is, to my taste, under-described and underdeveloped. I found the ending of the book frustrating, and the reason for the importance of Felicia’s role in the book was, in my opinion, irritating. I found the writing in the scenes drawn from Felicia’s life much stronger than that in the scenes describing the battle for Level 2. In other words, the scenes which should be gripping – the science-fiction aspects, the fantastical aspects, the ones which ought to appeal to me most – are the ones which left me cold.

In short, I would recommend ‘Level 2’. It’s a good book, with original concepts and a take on the afterlife which started off extremely well, no matter what way it ended up. I really liked the character of Felicia, and her relationship with the men in her life, and her friend Autumn. I also found Felicia’s parents, their careers, and their relationship with their daughter, interesting and different. Having said that, so much about the book made me want to just give up reading that I can’t recommend it wholeheartedly.

But – if you read it – I hope you enjoy. Particularly if you’re reading it in a hammock.