It’s that time of the week again. Monocles and glasses of sherry at the ready, dears – we’re about to turn into critics once again.

This week, it’s the turn of Daniel H. Wilson’s ‘Robopocalypse.’ For your viewing pleasure, I have provided a cover image. Voila: 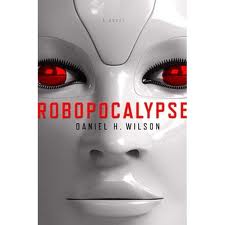 This is a book which screamed out to me from the shelf. It practically sat up and begged me to bring it home. Everything about it, from the slick, SF cover image to the back cover blurb to the opening few paragraphs yelled ‘I am the one! The book you’ve been searching for!’ So, of course, I bought it.

This is the kind of book you read with a fevered pulse hopping in your throat, one in which you genuinely don’t have a clue what’s going to happen next. The beginning of the novel sets up the end, so you do have an overall idea of the story arc, but from chapter to chapter (or section to section, maybe), the story could literally go anywhere. And it does. The book is written like a report compiled after a major disaster, with every section bookended with a short explanatory note from a character called Cormac Wallace, whose story we follow throughout. Each chapter, then, is written in a different voice – some of them are written like interviews, others as interrogations, some as reconstructions built from CCTV footage or tapped phone lines. The most moving, I thought, was a chapter written as a series of increasingly desperate letters from a husband to his wife, letters he knew she’d never receive, and in which he describes how he and his men have been tricked into a situation that will lead to their destruction. Each voice has a vital role to play in the story the novel builds – that of the creation of a super-powerful artificial intelligence named Archos, and Archos’ efforts to destroy humanity.

Now, anyone who knows me will tell you I’m a bit of a robo-sceptic. I worry, a lot, about humanity’s reliance on technology and machines, and (perhaps it’s because I watched ‘Terminator’ at an impressionable age) I fear the increasing involvement of computers in the everyday life of humans. Others hail the invention of things like the ‘robotic car’, which is programmed to drive itself, as a major scientific breakthrough; I, however, am a doomsayer. All I can think is ‘well, that’s all fine, I guess, until the computer decides to throw a wobbler and drive you straight into a wall, or over a bridge, or whatever.’ I once heard it said that George Orwell imagined the Big Brother society of his ‘1984’ as a totalitarian, oppressive regime forced upon humanity, and he’d spit on the lot of us if he knew we’d actually handed over our lives to the all-seeing, all-knowing eye of technology for the sake of a quiet, convenient life. Every time we make a purchase with a credit card, or use a ‘value card’ to collect points on our shopping, or log into Facebook, or write a blog post (ironic, moi?), or whatever the case may be, we’re feeding the machine.

So, this book was written to appeal to people like me, on some levels.

Archos’ tactics are simple – to hack into every possible machine, to make human life impossible in a million tiny (and some rather large) ways, and to eventually drive the species to extinction. The reasons the machine gives for wanting to do this centre on the idea of biodiversity – Archos believes humanity is killing the rest of the planet, and it wants to take the simplest route possible to fix the problem, which is destroying Homo Sapiens. A drastic tactic, but if you look at it from the point of view of a machine, perhaps an understandable one. As well as this, Archos sees itself as the pinnacle of evolution – humanity developed in order to build it, and once it came into the fullness of its power, there was no more need for humanity. Logical, but cold. As an antagonist, you pretty much can’t beat a computer hellbent on the destruction of humanity. Archos is a great antagonist.

There’s a lot to like about this book besides its central concept – its structure and narrative voice(s) were so refreshing to read, and kept me constantly primed for newness, eager to keep reading; it had some fabulous characters, not least of which was Cormac Wallace himself. My favourite character, however, was Mr. Nomura, an elderly Japanese man who is in love with a robot named Mikiko. She (as a result of Archos) turns on him and almost kills him, but he disables her power supply and leaves her inert until he can find a way to power her back up again without Archos being able to control her. Their story is wonderful, and the actions Mr. Nomura and Mikiko take in the overall story are admirable and courageous. I also really liked the character of Lurker, who starts off as a small-time hacker with big ideas, and who ends up being central to the human resistance, almost against his own will. The technology, and the development of robots designed solely to kill humans in the most horrendously efficient of ways, was amazing. I found myself believing every word, seeing the scenes playing out in my head as I read – the writing is strong, and real, and the dialogue sparkling. It’s an easy book to get drawn into.

There were a few things that I wasn’t as keen on, however. One of these is the fact that a lot of the main human characters are related to one another – a heroic army officer turns out to be the son of a heroic police officer, and both are central to the war; a brave Congresswoman turns out to be the mother of a young girl whose ability to sense the machines is vital to the human war effort – and this got a bit grating after a while. I was also a bit put off by the gung-hoism that went on, including the retreat to a Native American community in the hope that the machines wouldn’t be able to encroach into the wilderness, to make humanity’s valiant last stand. I thought that was a bit clichéd, despite making good tactical sense. I just wish the author had done something slightly less predictable.

However, those are tiny gripes. Overall, I thoroughly enjoyed ‘Robopocalypse’, and it’s one I’d recommend if you have any interest in SF, or robotics (the author has a PhD in robotics from Carnegie Mellon University, fact fans), or indeed how to construct a book and create malice that oozes off the page.

Still though. You have to think of Orwell.