How on earth is it Saturday already? *Shakes clock* *peers at it peevishly*

I’m not *this* desperate to slow down time – not yet, anyway!
Image: dailymail.co.uk

Oh well. In any case, Saturday is the day it appears to be, and so it must be time for this: 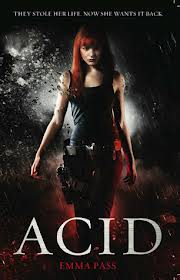 This week, it’s all about fighting The Man, as I’m feeling the love for Emma Pass’ marvellous début novel, ‘ACID’. It’s not exactly a comfortable read, but that – in essence – is what makes it so good. And it is, indeed, so good.

I read ‘ACID’ pretty much in one sitting – no mean feat, considering it’s over 400 pages long – and when I tell you it gripped me from the first sentence, I mean it. ‘ACID’ has one of the most arresting opening chapters of any book I’ve ever read; Pass’ grip over language and character doesn’t relax for one second for the rest of the book, either. I felt like Jenna Strong’s story was dragging me by the nose. I had to find out what happened to her, because her voice was so compelling and urgent. The book is tight, well-written, expertly paced and so very clever – it’s almost too much to believe that it’s Emma Pass’ first published novel. It’s extremely accomplished, and my hat is off to her for that alone.

‘ACID’, set in 2113, is the story of the aforementioned Jenna Strong. At the time of the novel’s opening, Jenna is incarcerated in Mileway Maximum-Security Prison, having, we’re told, murdered her parents at the age of 15. She is (perhaps a tiny bit implausibly, but I instantly forgave it) the only female inmate in this prison; as a result, of course, she is sexually and physically victimised by the male inmates. Or, at least, the male inmates attempt to victimise her – Jenna, easily the most kick-ass heroine I’ve read this side of Katniss Everdeen, does not take their maltreatment lightly, and learns very quickly how to defend herself. After the breath-holding tension of the first few chapters, where we learn all about the prison, Jenna’s past, and her painful present, the story quickens into a rescue mission, mounted by persons unknown, to break Jenna out of Mileway.

The book takes us through Jenna’s new existence outside of prison, her efforts to stay under the radar and away from ACID – the Agency for Crime Investigation and Defence, i.e. the most brutal, merciless, and omnipresent police force you can imagine – and her growing involvement with an underground resistance movement which is dedicated to freeing the population from ACID’s iron grip. In the course of this, she must assume a new identity, start living a different life (including being forced to take a LifePartner with whom she cannot see eye to eye – the breakdown of their clandestine relationship brings her entire existence into danger), and eventually, inevitably, go on the run. This identity-swapping is done in order to try to evade ACID’s terrifying, all-seeing surveillance; later in the book she is forced to assume yet another identity, against her will this time. All these layers are deftly handled, giving Jenna’s character such satisfying texture and complexity.

The story describes daily existence in a country which was once the UK and is now the IRB, a walled-off, segregated totalitarian state. It is a chilling vision. Everything is monitored – ACID knows who you talk to, what you read, what you think, who your friends are – marital unions are state-sanctioned (everyone is assigned a LifePartner in their late teens, and any sign of deviance from this is severely punished), and couples may not become pregnant without a permit from the state. It’s not a new idea that total power brings total corruption, but that doesn’t mean it’s not a good idea – Emma Pass makes such excellent use of the trope that it seems new and fresh in her hands. The gradual uncovering of the truth behind Jenna’s early life, as well as her own origins, gives the story an emotional punch and makes you care deeply about Jenna and the pain she has been forced to suffer.

The secondary characters are also excellent, particularly Max – he’s almost the ‘heart’ to Jenna’s ‘muscle’, which is a refreshing reversal of expectation – and his kindness and compassion show us exactly how hard Jenna has had to become in order to survive. She is, however, hiding a painful secret from him for a large part of the book, and the strain this causes is made very clear. As well as excellent characterisation, another of my favourite features of the novel is the use of reproduced newspaper articles and komm readouts (‘komm’ being a device worn in the ear, and monitored by ACID, which allows you to ‘link’ to other people – almost like a smartphone, but with a heads-up display), which give us another perspective on Jenna’s first-person narration. I enjoyed the disparity which sometimes occurs between the way she views the happenings in her world and what ACID is actually thinking or doing – it’s nicely used to rachet up the tension where necessary. Plus, it looks really cool.

In short, everything about this book is top-notch – the writing, the characters, the narrative voice, the concept, the action sequences, the world-building (which feels sickeningly plausible!), the technology, and the emotional arc our characters travel. I did have two tiny quibbles, one of which I’ve touched on above (Jenna’s being the only woman in the prison), and another which occurs near the end of the book (where Jenna is handed an opportunity to achieve one of her goals, instead of creating her own means of getting what she wanted, which would have been more satisfying to read). However, these quibbles are swept away in the overall force of nature that is ‘ACID’.

Just to note: ‘ACID’ is probably considered a YA novel by publishers and librarians and booksellers, and so on, because Jenna is in her late teens, but I’m sure it would be relished by fans of crime writing, SF and speculative fiction, too. An excellent piece of work, which is heartily recommended.

Happy weekend, all! May the books be with you…

1 thought on “Once More Unto the Book Review – ‘ACID’”