It’s Friday. This is, undeniably, a Good Thing, and I am looking forward to the weekend partly because it’s the weekend, of course, but also partly because I’m meeting an old friend tomorrow, and that will be lovely.

However, it’s also a Major Pain. This is because I’m also dealing with the fact that a competition I wanted to take part in, the closing date for which is next week, will probably have to remain unentered. This, my friends, is not only because I completely messed up the dates – this happens to me on a worryingly frequent basis – but also because a story idea I’ve been working on for a while is just not happening. It may happen in two weeks’, or three months’, or fourteen years’ time, but as of right now, it’s at a standstill. 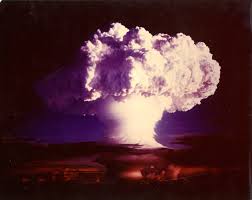 This is what my head feels like.
Image: en.wikipedia.org

There’s so much about the story that I like. I really love the protagonist – everything from her name to her demeanour to her appearance pleases me. I have already imagined the final scene, and the ‘voice’ of the characters, completely different from anything I’ve written before, is an interesting journey for me. It’s so annoying, though, to have the beginning and the end of a strong story mapped out, and no clear way of getting from A to B. I know all the story needs is time, really, but time is what I do not have. I hate the idea of leaving a competition unentered just because I couldn’t get my act together, but there it is. It looks like that’s exactly what will have to happen.

I’ve made a point of entering competitions over the last few months – there is certainly no shortage of them. So far, I’ve had no success whatsoever, but then, success isn’t really the point. The point is to impose discipline upon myself, to have a deadline and to meet it, to fulfil the ‘brief’, so to speak, and to rise to a challenge. Simply meeting the deadline, for me, is a success in itself. So, you might understand now why I’m so irritated with myself. Not only have I missed a competition, in all likelihood, but I’ve also let myself down. It’s true that it’s not easy to keep track of everything, and I’ve had a lot of things to think about lately, but that’s no excuse really. The fact is, not only is the story not ‘right’, but I also thought I had an extra week in which to get this work done. I don’t. For some reason, I always manage to fudge dates when it comes to the end of one calendar month and the beginning of another. Somehow, in my mind, several extra days just creep in out of nowhere. This often causes me problems. You’d think, at this stage in my life, I’d have come up with a way to deal with this absent-minded dizziness.

I suppose, at the end of the day, it’s only a competition – and probably one in which my entry would’ve sunk without trace, too – and I should just give myself a break. It is important to take part in competitions and become part of a writing community when you’re starting off your journey as a writer, of course, but it’s also true to say that missing one out of the multitude isn’t the end of the world. It feels that way, but it really isn’t. I suppose the little voice at the back of my head will always be there: ‘You could’ve won this one. This could’ve been the one! You’re an eejit to have missed it.’ Those little voices in your head have an annoying tendency to be right, sometimes. That must be what makes them so annoying.

In any case, I still have today, and Sunday, before I need to really give up hope. Perhaps it will all work out: I’ll embark upon a writing marathon and the whole thing will just slot together like Lego and I’ll get it submitted with hours, instead of seconds, to spare. Yeah, maybe – and maybe I’ll also become the first Irishwoman to walk on the surface of Mars, or to cross the Atlantic using a jet-pack. You know, I have a feeling I’ll still be sitting over the same stubborn 800 words in a week’s time, wondering why they just won’t cooperate, and driving myself further round the twist.

Perhaps I should just throw in the towel, and take up knitting instead. What do you reckon?

Have a wonderful Friday, and a happy (and hopefully unfrustrated) weekend!