It’s strange how significant everything becomes when you’re facing a mortal threat. Every step, every breath, every thought, every decision becomes invested with new importance. Everything seems slow. Your breathing sounds too loud, and the rushing of blood in your ears makes you light-headed. The morning breeze ripples through the flags overhead as you make your way into the courtyard, already covered with an inch of sawdust, and you feel the weight of your armour pulling on every muscle and sinew in your body. A few yards ahead of you, a sword is placed, point-first, in the hard earth.

Your guts turn to solid ice as you hear the beast’s first roar, loud as a gash being torn in the face of the earth itself. It makes your knees want to bend of their own accord, and it makes your head want to bow. You have to fight the urge to crumple before it. Inside your metal visor, nobody can see you weep, so you let the tears come. Then you remember there is nobody here to see you, anyway; no friendly faces, nobody to guard your sword-arm. 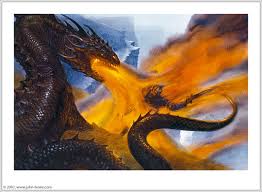 Sometimes, in literature, dragon-slayers live; most of the time, however, they die. Dragons are the ultimate enemy, the one true test of a warrior’s prowess. So powerful that they get the better even of men like Beowulf, the greatest hero of his age (and ours, arguably), dragons are not to be trifled with. At all times, they are to be taken seriously, and they can never be underestimated. Waking one is a complicated business, and slaying one more complicated still. It’s best to leave them unroused altogether, and let them get on with slumbering and you on with living.

Sometimes, though, they wake of their own accord.

Facing doubt, in many ways, reminds me of dragon-slaying. It’s just you and the dragon, eyeballing one another over a sheaf of paper or the thin film of a computer screen; you hear its hissing voice in your mind, laughing at you for having the cheek to think you are worthy of putting words on paper and joining the ranks of ‘those who write’. The dragon is bigger than you, more powerful than you, and far more frightening than you can imagine. ‘I have slain mightier than you,’ it gurgles. ‘I have devoured warriors who could snap you like a twig!’ There’s nothing you can say to this, because you know it’s true.

It’s all too easy to back down from the doubt-dragon, and let it live inside your computer or – worse – inside your mind for the rest of your life. It seems like the simplest thing to just give in and turn away from its jeering, toothy grin, to walk away while doing your best to ignore its taunts of ‘I told you so!’ It can feel like doing anything else is the height of foolishness, like you’re risking your life by engaging with it. The only safe option, you convince yourself, is to give in and move on.

But if you do that, the dragon wins. It doesn’t even have to lift a claw to defeat you – you’ve defeated yourself.

I feel a little like I’ve been swallowed by the doubt-dragon at the moment. I feel like I’m stuck somewhere in its gullet, not quite inside its foul and noisome stomach (where I will surely perish, prithee), but not far off. Everywhere I look, all I see are dead ends, and there doesn’t appear to be a way out.

Instead of giving up and allowing myself to be swallowed, though, I’m really doing my best to understand that I need to make my own way out. If you don’t see a way to escape, then you need to make one.

St Margaret slaying the dragon by attacking it from within.
Image: greenwichworkshop.com

My attack of the doubts has come about because I have to do some unpicking of ‘Tider’. I’ve managed to write myself into a place where the story is no longer interesting or holding my attention; it seems too flabby and far-fetched. As well as this, the setting is poor, the character motivations are illogical, and the structure is wrong. I know I’m writing a first draft, which gives you a bit more leeway to make errors like this, but if it leads to you losing yourself in a morass of darkness, then something has to be done before you reach a point where you can’t find your way back. It’s important to complete the first draft, no matter how hard it is, which means I have to rescue myself from the dragon of doubt before I’m lost forever in the labyrinth of its infernal intestines.

So, there’s only one thing for it. I’m hefting my sword, and I’m picking what looks to be the most efficient way out of this mess, and I’m punching on through. See you on the other side, with any luck…

*All dragons used in the production of this blog post were unharmed, and all dragon involvement was monitored by the Geatish Dragon-Lovers’ Association. Any encouragement to harm, slay, maim or otherwise interfere with the lives of ordinary, law-abiding dragons inferred through reading this post is unintentional, and regrettable.