In this week’s thrilling instalment, we catch up with Emmeline and Thing after they’ve fought their way out of one sticky situation, only to end up in another, rather stickier, one. They’ve been rescued by some people who may – or may not – be friends, and they’ve been told to make themselves scarce while a battle is fought over who gets to kidnap them next. So, they flee the fighting, searching for a ‘high place,’ in which they are to rendezvous with their rescuers once the dust has settled… but, of course, because we’re talking about Thing and Emmeline here, nothing really goes to plan. 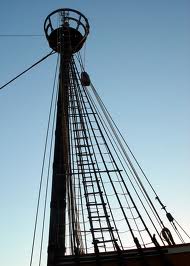 ‘What have I got myself into?’ Thing muttered as they hurried down the corridor. ‘Well done, you clever feller – see a young girl, all on her lonesome, figure she’d be good comp’ny on the way to Paree, bit of fun maybe.’ Emmeline felt the bones in her hand crunching as Thing tightened his grip on her fingers. He threw her a look, too, one that was full of ticking clocks and pots boiling over.

‘What are you looking at me like that for?’ said Emmeline, her breath catching and clacking in her throat. ‘It’s not like any of it is my fault!’

‘No? Oh, right. Sorry. Maybe it was another kid they were lookin’ for back there, then. My mistake.’

‘Oh, shut up.’ Emmeline’s feet hurt, and her head was still ringing from the explosion. Her dress was utterly filthy, and her stomach was threatening mutiny at any moment. ‘Where are you dragging me, anyway?’

‘Somewhere high, or didn’t you hear what Edgar said?’ They were approaching a corner, and Thing flattened himself and Emmeline up against the wall before peeking out, very carefully, and checking in both directions. Satisfied, he yanked her forward and on they went.

‘Yes, I heard,’ snapped Emmeline, trying to drag her fingers out of Thing’s sweaty grip. ‘That doesn’t mean I’m going to do it!’ Thing snapped his head around to face Emmeline, and they ducked into a wide doorway.

‘Who says I have to explain myself to you? Let me go, will you!’

‘No chance. Now, tell me what your plan is, seein’ as it’s bound to be so much better than Edgar’s.’

‘You met him ten seconds ago!’ cried Emmeline. ‘How do you know you can even trust him?’

‘But how did he even know I was on this boat?’ said Emmeline, her voice an almost-hiss.

‘Well, he – obviously, he –‘ Thing stuttered to a halt, looking confused.

‘Exactly. So, maybe he’s in on it?’ Emmeline watched as this thought settled in Thing’s mind like a stone settling onto the sea floor. After a few minutes he frowned at her, like she was a jigsaw piece he couldn’t find a place for.

‘You have some serious trust issues, y’know that?’

‘Yeah. Well.’ Emmeline sniffed, trying to straighten her dress and settle her satchel with her one free hand.

‘What is that supposed to –‘

Emmeline bit her lip as she thought. ‘I suppose we could go to that high place, and wait for Edgar there. Be ready for him, if you know what I mean. Take him by surprise and then make him – I don’t know. Confess, or something.’

‘We’re on a ship, Thing,’ said Emmeline. ‘It’s not like we’ve got a lot of choice about where to go.’

‘Fair point, fair point. Right.’ Thing’s eyes grew alert again as he stuck his head out of their hiding place. ‘Highest place I know of on a ship is the crow’s nest, right? ‘M sure that’s what Edgar was on about.’

‘This is going to involve climbing, isn’t it?’ asked Emmeline as they started jogging down the corridor. She couldn’t shake the feeling that there was someone right behind her. The satchel would give her a bit of protection, of course, but not a lot. If someone shot at her, she wondered if she’d even know they’d done it before she’d be dead, and then she wondered about how strange her life had become – a couple of days ago, she’d thought it was only her parents who were trying to make attempts to disrupt her continued existence. Now, it seemed, everyone was at it.

‘Right. Here y’go,’ said Thing, as they pulled up beside a narrow metal staircase which led, as far as Emmeline could see, into pitch black darkness and not a lot else.

‘What’s this?’ He shoved her onto the rungs with bony fingers, his quick eyes keeping careful watch.

‘’S a stairs, stupid,’ he said, only half-listening.

‘Where does it go?’ snapped Emmeline, already three or four steps up. She realised her footsteps made a faint clang as she walked, so she tried to step quietly. The darkness was getting thick around her, like someone wrapping her up in strips of soft, suffocating cloth. She focused on breathing calmly, trying to ignore her heart, which was drumming out a fast rhythm on the inside of her chest.

Like stretching out your aching muscles first thing in the morning, or feeling an unexpected breeze on an unexpected place, Emmeline realised that she’d reached the top of the stairs. It was still dark, but not quite as bad. Up here, a giant deck spread for miles and miles. Lights were spaced out regularly on the waist-high barrier all around, and muffled shapes in the gloom were probably benches, or places for the well-heeled passengers to take a rest and some shelter from the wind while they were up here getting the sea air. It was sort of peaceful up here.

‘This way. Come on!’ Thing jerked her out of her thoughts by pulling on her hand like a dog straining at a lead. She took a few uncertain steps toward the centre of the deck, where – as Emmeline feared – a very tall, very spindly-looking structure was to be found, lashed to the deck by a multitude of wires. A light burned in the tiny-looking cabin at the top of the narrow ladder they’d have to climb. Emmeline tasted sick in her mouth as she stared up at it.

‘Ain’t got time to waste,’ muttered Thing, jumping onto the lower rungs. ‘You follow me, yeah? Or d’you wanna go first?’

Emmeline’s stomach rolled over. ‘You go first,’ she said. Thing stopped climbing, and leaned over the side of the ladder to peer down at her. Emmeline was glad of the darkness.

‘You’re not scared, are ya?’ he asked, coming down a rung or two. ‘Not with that box o’ tricks on your back, and a brain like yours in yer head, surely?’

‘I don’t – I don’t like heights, really,’ said Emmeline, coughing to cover up the wobble in her voice.

‘No problem,’ said Thing, cheerfully. ‘I mean, it’s so dark up ‘ere you can barely tell it’s up so high.’ She could hear the grin in his voice, even if the darkness hid it. Like an athlete, or a monkey, Thing scampered up the ladder without a second thought.

‘I don’t like darkness, either,’ muttered Emmeline, wrapping her fingers round the nearest rung and taking three deep breaths, in through her nose and out through her mouth. ‘Emmeline Mary Widget, you can do this,’ she told herself in a stern tone. ‘The secret to why you’re even here and where your parents are lies – more or less – at the top of this ladder. And if Thing can climb it, so can you! Right?’ She nodded decisively, and grabbed another, higher, rung. She found footholds, and started to climb, telling herself that her knees weren’t wobbling – it was merely the movement of the ship. Slowly, slowly, she ascended.

‘Will you get a move on!’ Thing’s voice fell on her like a handful of iron filings dropped from a height. Shivering, she felt his words trickle all over her, poking and prodding and nipping at her skin. She clung to the ladder like a baby clinging to its mother’s finger, and allowed a rattle of terror to skitter through her whole body before she trusted herself to answer.

‘I’m coming!’ she whispered back, her voice hoarse.

Just then – like his voice had summoned it – a huge, searing light switched on a few feet away. Emmeline got such a shock that she almost lost her grip on the ladder.

‘Ems!’ she heard, through the pounding of the blood in her ears. ‘Now, now, now! Get up here now!’ Fear had made her hands and feet numb, but Emmeline moved.

‘Hands then feet,’ she muttered, trying to keep calm. ‘Hands then feet.’ The light was nearly as wide across as she was tall, and as she watched it started to sweep over the deck in great arcs, like it was searching for something.

It was searching for something, she finally understood. Her.

‘Please, Ems! Hurry up!’ Thing’s voice seemed closer, and she looked up to see him, just barely, hanging off the top few rungs of the ladder like a flower on a long, narrow stem. She could see the terror in his face, and his outstretched fingers were just too far away for her to reach…

Then, the light finally found her. It flicked in her direction, making her freeze in terror and making her eyes sting and water as she struggled to focus. Thing was yelling at her, and she felt the ladder shudder as he started to descend. Her brain screamed as it tried to understand what was happening. Then, something slapped Emmeline’s face, and grabbed at her outstretched arm. Almost like she’d been picked up by a huge, rough-fingered hand, she felt herself being plucked off the ladder and then, sickeningly, she was falling, right toward the deck, what felt like miles and miles below…