Today we’ll be looking at a book that made quite an impression on me – not necessarily for good reasons, admittedly, but an impression nonetheless. It’s ‘Arclight’, a début YA dystopian fantasy from US author Josin L. McQuein. Unfortunately, I’m probably going to have to drop a few spoilers in here in order to discuss my issues with the plot (though I’ll try to keep them to an absolute minimum), so if you’d rather remain unspoiled you might prefer to toddle off and have a cup of tea instead, and I’ll see you on Monday. 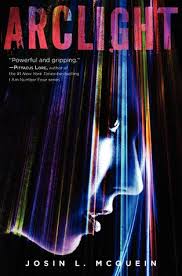 Okay. So, you don’t mind spoilers? Are you sure? Right. Let’s get cracking.

This book sounded like it was going to be great. The protagonist is a teenage girl – Marina – who lives in a world where light is life, light is safety, and going into the Dark spells death. At some point before the story begins, she is found on the borders of the Dark in an area known as ‘the Grey’, with no memory of who she is, or how she got there. She’s taken into the Arclight – the ‘fortress of light’, for want of a better term – populated by humans, which acts as the last outpost against the Fade, creatures who live in the Dark. She is the only human to have survived an encounter with the Fade for generations; feted as a ‘Fade-killer’ and condemned as ‘Fade-bait’ in equal measure, she cannot find a place to fit comfortably in her new surroundings.

The story progresses in that slightly predictable way that all YA dystopian novels have: conflict, battle, injury, wounds, (insta-)love, powerful friendships, testing of friendships and family bonds, wrongheaded adults who refuse to listen to reason, journeys into the unknown to find out The Truth, and all that. If I sound jaded, I don’t mean to – these are the things a reader expects from a YA dystopian novel, and ‘Arclight’ delivers all this in spades, as it should. I have no problem with any of that, and the book does all of these things very well.

What I do have a problem with, though, is a book which leaves its reader feeling a bit like this while they’re reading: 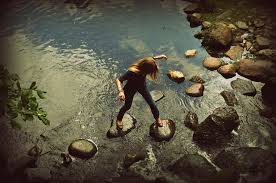 At several points during my reading of ‘Arclight’, I have to admit that I had absolutely no idea what was going on. I couldn’t follow threads of conversation, I couldn’t get a mental hold on anything that was being described, and at several junctures I wanted to insert myself into the novel and give several characters a robust slap across the jaw. The book begins just as the Fade mount a violent attack on the Arclight (so, very much ‘in medias res’, which is not something I object to, generally, as long as the reader is given something to hold on to), and in this case I found myself flailing a little, not really understanding anything, but carrying on in the hope that it would all be explained as things went on.

Well – things did, and did not, become clearer as the story progressed.

My first issue was with the Arclight itself. I was never sure whether it referred to the physical building in which our human characters live, or merely the large circle of powerful lights which switch on as night falls, keeping the humans safe in the face of the Dark. Mention is made in several places of ‘breaches’; it wasn’t clear to me whether this meant that the enemy was crossing the light, or breaking into the physical building. It seemed to change, as required. Then, we have the Fade themselves – the enemy of the humans, and the frightening denizens of the Dark. Our first encounter with them, during the initial battle, makes them seem a lot like the Dementors from Harry Potter – tall, faceless, skinny, dressed in grey ragged robes, complete with slashing claws and gnashing fangs. They seemed like a cross between zombies and vampires, to my mind, at first; but then, midway through the book, they change completely into something entirely different.

Okay, so I can get on board with that. An author has a right to do whatever she likes to her characters, yes? Yes.

But then, we have Rue. A character who I liked, because he was strong and brave and loyal; a character whose human-seeming inhumanness did, to be honest, unnerve me a little. But, it’s also true to say that he’s a character whose actions, when he’s in the Arclight, make no sense – unless, of course, you guess at one of the novel’s major plot twists, and then things start to fall into place. Sadly, Rue’s actions mean that guessing at the aforesaid major plot twist becomes too easy, and – in essence – reading about his illogical insistence on Marina accompanying him through the Arclight compound when he’s more than strong and capable enough to do it by himself gives a Huge Giant Hint as to what the truth behind their relationship is. I thought that was a shame. To me, it was a major signpost toward the novel’s conclusion, and it sort of ruined the big reveal.

I also have major problems with the backstory between the humans and the Fade. If even half of what the novel says about the Fade, and what they’ve done to humanity, is true (within the story world), then the whole book makes me profoundly uneasy. As ‘Arclight’ progresses, and we learn more about the Fade and how they operate, the overall question in my mind was ‘why?’ Why did they choose this particular course of action, why would an organism develop or evolve in quite the way they have, and why – why now – do they want to interact with the humans? Most importantly, I found myself asking: ‘what exactly are the Fade?’ It’s explained, sort of, but I’m not sure I fully understood that explanation. It was pleasingly SF-lite, with mention of futuristic cures for disease and the perennial ‘man tinkers with nature, and nature bites back’, which never fails to deliver, but even still. I was left with a very confused idea about this species at the end of the novel. Then, this book is the first in a series, so perhaps the story of the Fade will be dealt with more fully in future volumes.

There were good bits to this book, too. There were some scenes I did enjoy, and there are passages which are exceptionally well-written. A scene near the end of the book when an unexpected person saves Marina from danger is touching, and I was intrigued by the character of Rue who, despite his courage and loyalty, has touches of cruelty too; he makes a nice change from the flat and bland Tobin (the other male lead – one female lead and two male, I’m sure you can see where we’re going with this one.) I enjoyed reading about Marina’s sparky best friend Anne-Marie and her family, and I sympathised with Marina’s essential problem – which world to belong to, which identity to cleave to, which family to choose – and her need to find a way to grow up into the person she’s supposed to be without denying her past.

But, overall, ‘Arclight’ left me confused, and bequeathed unto me a headache. It wasn’t a bad book, as such, but it reminded me of a freshly-plastered wall which hadn’t yet been smoothed over. It had everything a great YA book needed, but it all seemed jumbled and spiky and hard to enjoy.

Has anyone else tried this one? If so, what did I miss?