Life is full of ‘crucible’ moments, isn’t it? Moments which, when you look back, you recognise as being particularly important for one reason or another, influential in your development as a person, and pivotal in your individual history. I have plenty of these moments; not all of them revolve around books, but – me being me – the most important ones do. I’ve already discussed, at some length, the importance of books like The Little Prince and Elidor to me so I won’t revisit those here (you can check out this post if you’re interested), but what follows is a roughly chronological list of books which, when I first encountered them, had a profound effect on the direction of my life.

1. The Diary of a Young Girl

I was introduced to Anne Frank’s diary at around the age of seven or eight, when our teacher set it as a class text. We were only supposed to read sections of it but – of course – I ended up reading the whole thing in my own time. All our teacher told us about Anne Frank was that she had written her book when she wasn’t much older than us, and that she had lived at the time of a terrible war. I don’t think I can over-emphasise, then, how it felt to read to the end of this incredible book and learn, out of the blue, that Anne did not survive this war. By the time I’d read the first few entries, I was already in love with Anne and her family – a love which has endured to this day – and it broke my heart when I read the postscript describing how the Franks had been betrayed, and how they’d died. I felt like I’d lost a friend, and it was the first time I’d been faced with the evil that can exist in the world, made all the more terrible by being juxtaposed with some of the greatest good I’d ever read about.

Reading The Diary of a Young Girl changed my life and left an indelible impression on me, and so it was a shoo-in for my list.

I know I’ve mentioned pTerry on the blog before (by the way, if you don’t know why he’s called pTerry by his fans, I exhort you to find out), but he’s important enough to be included on this list again. The first Pratchett book I read was Wyrd Sisters, which I remember begging my father to buy me one sunny Saturday afternoon when I was about eight or nine. He’d long accepted the fact that I was a bookaholic by then, and in lieu of pocket money (an alien concept to my brother and I as kids) he’d agreed to buy me a book every week or two. So, on this particular book-hunting trip, I spotted the thrilling cover of Wyrd Sisters, fell instantly in love, and it was that book or no book.

My dad was a bit dubious about buying this book for his teeny-weeny child (which, if you look at the cover, is entirely understandable), but he trusted my judgement and it came home with us. I devoured it, didn’t understand the plot at all, but loved it anyway. I told myself ‘I’ll put this book away until I’m bigger and I’ll read it again then,’ and I did exactly that.

I loved it, and I love it still. It was the first ‘big person’s book’ I read, and for that reason it’s one of my pivotal reads.

3. Judy Blume’s Are You There, God? It’s Me, Margaret and Then Again, Maybe I Won’t

I think I’ve read pretty much every Judy Blume book in existence – Deenie and Tiger Eyes very nearly made this list, too – but I’ve chosen Margaret and Then Again because I read them both in quick succession the year I turned twelve, itself a pivotal age. Margaret taught me a lot about what was facing me as I teetered on the brink of adolescence, terrifying and tantalising me in equal measure, and Then Again gave me a much-needed window into the mind of the average teenage boy. From Margaret, I learned all about menstruation and complicated friendships, and from Then Again I learned that, underneath all their inexplicable mystique, boys were just like me. That was a mind-blowing lesson.

I read loads of books during my time at secondary school, but for some reason this one sticks out the  most. I guess this is because I studied it during the last two years of my post-primary education and then took an exam on it, and during that time I probably read it six or seven times. I’d never really been in love with a fictional character before I met Heathcliff, and even though I now see him as an emotionally manipulative loon, some of my heightened hormonal adoration remains. I adored this book when I first read it, and it was my first classic.

I studied English Literature at university, and – naturally enough – I read a ton of books. I could have picked any volume out of hundreds, but this one made the cut as a pivotal read because its protagonist, Alexandra Bergson, nestled in my heart and has never left. A big-boned, hard-working country girl, Alexandra is determined to make the farm she inherits from her father viable once again, and she pours every drop of her effort into her land. At one point in the novel she has a dream where she is picked up and carried effortlessly by a golden man, a man the colour of her cornfields, whom she senses loves her with the sensual passion that is missing from her real life. She is particularly moved by the fact that he is strong enough to carry her, as in reality she knows no man who would be capable of such a feat, and she wakes in tears. Alexandra is all about deep-seated passions – feelings buried so deep she can’t even admit them to herself – and, at the time in my life when I first met her I identified with her in a very profound way.

The Secret History is the book which almost got me fired from my first real job after college, because I was caught repeatedly reading it under my desk. It was, to the best of my recollection, the most unputdownable book I’d ever read up to that point in my life. It stuck straight to my brain because it described the kind of milieu I had just left – the world of the university – which was, at that time, the place in which I wanted to spend the rest of my career. I dreamed about a life in academia while answering phones and preparing mail-outs, and even though I’ve long since abandoned that dream, for very good reasons, this book gave me a taste of what I yearned for. It also made me feel glad that I was a literary nerd, which was a huge comfort.

So, this book isn’t my favourite of the Harry Potter series (that would be The Philosopher’s/Sorcerer’s Stone, fact fans), but it’s on the pivotal reads list because it’s the one where… it’s the book in which… Oh, goodness. I just can’t say it.

I adored Dumbledore. I can’t even explain why. I prefer him even to Gandalf, which is saying something. When I read that scene, the one where he… anyway, I remember screaming ‘No!’ and weeping, uncontrollably, as though I’d just been punched in the solar plexus. I had to close the book, allow myself time for a good cry, and then attempt to finish it through a veil of tears despite the fact that all the sunshine had just been removed from my life.

Yes. This is how emotionally invested I can allow myself to become in fictional characters.

So. This is the book that taught me how to keep going with a book series even when the heart has been ripped out of it. Pivotal, I’m sure you’ll agree.

I wish I knew more about graphic novels. It’s a genre into which I’ve always intended to immerse myself, but I’ve never quite managed to get around to it. The only graphic novel series I’ve ever read in its entirety is Sandman, but – to be fair – if you’re only going to read one, then Sandman is a good one to pick. Based around a family of siblings known as the Endless, consisting of Death, Delirium, Desire, Destiny, Destruction, Despair and Dream, the latter being the central character in the series, it follows their interactions with the fate of the universe and the lives of humans both individually and generally. The Endless are not gods – they are older even than that – but they are more like personifications of their names, and each of them has a vital role in the correct running of our universe and all universes. They are definitely a dysfunctional family unit, but their adventures make for compelling and awe-inspiring reading. Also, the art is incredible. Several artists illustrated the series, but I couldn’t possibly pick a favourite.

All right, so these aren’t a book, singular, but they were definitely a pivotal literary event in my life. I discovered the SF Masterworks series while I worked as a bookseller, and it was almost more than I could do to avoid ordering them all in for myself. I have managed to collect several of them, however, and I’ve yet to be disappointed. Look out for their distinctive yellowish covers, and collect away. They are fantastic. They taught me how big a nerd I am, and how comfortable I am with that knowledge.

I couldn’t leave a list like this without mentioning a medieval text. The Dream of the Rood is an anonymous Old English poem about Christ’s crucifixion written from the point of view of the cross, which is exactly as nuts as it sounds. It’s a psychedelic piece of literature, and it transfixed me when I first read it. In my final year at university we were asked to write a paper on it, and even though there were plenty of widely available translations (or modernisations, really) of the text, I wrote my own, painstakingly working through the poem word for word. I’ve never been so absorbed by anything in my life, before or since.

I wrote the paper. I got a First. It was awesome.

Also, as a direct result of this text I did an MA and then a Ph.D. in medieval literature, which led – indirectly, but clearly – to the rest of my life’s happiness. So, pretty pivotal.

So, there you have it. My life’s defining moments, as expressed in books. I hope you’ve enjoyed this post, and if you have, please consider writing one of your own and linking back here. I’d love to read what your top ten (or five, or twenty) literary turning points are. 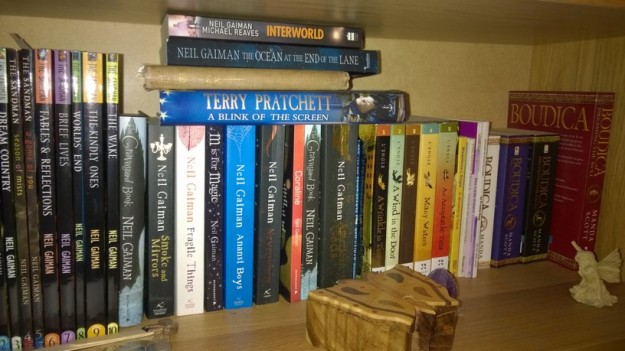 My Neil Gaiman collection, aka my pride and joy.