Where do I even begin with this book review? I mean… I don’t know what I mean. 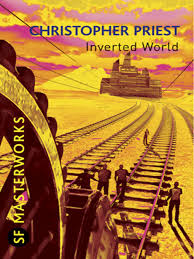 First published in 1974, Christopher Priest’s Inverted World (called The Inverted World in some editions) is, to my mind, a strange beast. It’s an SF Masterwork, which is why it found its way home to me; I’m a total sucker for that series of books, as you may remember from this post. I was intrigued by it in the main because of the fact that it is about a giant city which is mobile, winched along a huge system of tracks in order to try to catch up with the mysterious ‘optimum’, always slightly ahead of the city and always just out of its reach. I’ve read (and loved) Mortal Engines by Philip Reeve, a children’s book which uses a very similar idea – that of giant cities mounted on tracks which must keep moving or die – and so I was intrigued by the idea of this earlier book, and curious to see how different or similar it would be to Reeve’s work. I’m also prepared to admit that Inverted World had a lot to live up to – I really do love Mortal Engines. So, perhaps it was overburdened with expectation from the start.

There is a lot to enjoy in Inverted World, however, not least of which the intriguing use of narrative voice. The book begins in third person, telling the story of a woman named Elizabeth (Liz) Khan who appears to be working as a medic in a dusty frontier-type town. After our brief introduction to Khan, we are then thrown into a first-person narrative in the voice of Helward Mann, who is, in his own words, ‘six hundred and fifty miles old,’ or just at the age of maturity. After this section in first-person, we enter a third-person narration, distancing us from Helward but still following his life. Then, it’s back to first-person Helward, and finally back to third-person Liz Khan. It’s an interesting structure, which I admired. I also admit to being riveted by Helward’s opening line about being ‘six hundred and fifty miles old’; it’s one of the most effective introductions in fiction I’ve ever read.

Helward lives on board a giant city, known to its inhabitants as Earth, which is slowly and painfully being winched across the surface of a distant planet. This planet has a strangely-shaped sun and an odd gravitational field; time works weirdly here, and a complicated system of guilds within the city work hard to keep the populace ignorant of most of the realities of their world, including that the city is moving at all, what the outside world looks like, how their synthetic food is made, and why their world is the way it is. The city of Earth must keep moving, because if it does not it risks destruction; even without this extraordinary pressure, however, it is in danger. Its population is declining because far more boys than girls are being born, and because there are so few women a system of bartering takes place as the city moves, which sees women from ‘outside’ convinced to come to the city, procreate with its men, and then return home. The city’s guilds also use the labour and resources of the people who live in the areas through which it passes; this labour, despite the pains which are apparently taken to look after the workers’ rights, is perilously close to exploitation.

For at least three-quarters of this book, my disbelief needed to be propped up repeatedly. I’m all for immersing myself in a fictive world, but for that to happen it needs to make sense and be clear. I had to admit that I couldn’t get my head around the city of Earth. This wasn’t because of the fact that it was on tracks, which had to be laboriously lifted from behind it and re-laid in front, nor the fact that it needed to move for mysterious reasons, nor even the fact that there were members of the Futures Guild who scouted out the terrain in front of the city and came home strangely changed – all of that, I had no problem with. I found it hard to imagine because of the fact that they were clearly not alone on this planet. The fact that the inhabitants of Earth were constantly negotiating, dealing and interacting with other humans – people who spoke Spanish and who lived in dirt-poor conditions compared with the relative luxury of the city – kept dragging me out of the world Priest was creating. I didn’t like Helward much, either; he seemed unnecessarily dense, and his attitude towards women (particularly his wife, Victoria) got on my nerves, but perhaps that was the point. Also, the book was a little slow, particularly during the early sections which deal with Helward’s apprenticeship and his education on the tracks – which was, I guess, supposed to mirror his experience – but when we get to the point where Helward starts to put things together, the pace picks up and things get much more enjoyable. I found the end fascinating from an SF point of view, but from a narrative point of view it was a bit rushed and disappointing.

So, all in all, this book was a mixed bag. 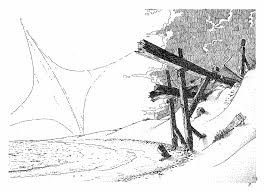 From a science perspective, and a hard SF perspective, this book is a deserved and acknowledged classic. From this reader’s point of view, though, the end is a little too ‘deus ex machina’ and the start too detailed and hard to plough through. If you’re going to read it, all I’ll say is: keep going through the opening sections, because the latter parts are worth it. It’s not a reader-friendly book but it is a marvellous piece of imaginative fiction and the truth behind Earth city (albeit, to my mind, clumsily handled) is intriguing. It’s the sort of ending that makes the whole book which has come before it morph into a different reality in your mind, and I like that.

I’m not much into giving ‘ratings’ for books, but this one would be a 6.5 for readability and an 8 for concept. So, draw your own conclusions!