Susan Cooper’s most recent novel, Ghost Hawk, is a masterpiece.

This is a big statement coming from a person who has adored every word of every Susan Cooper novel that she has, thus far, read: but I stand by it.

Having said this, I have read several reviews of Ghost Hawk which criticise its author’s treatment of Native American characters and traditions. I am no expert, so I won’t have much to say about Susan Cooper’s treatment of her historical sources, but I want to make it clear that I mean no disrespect at all by saying that I enjoyed this book.

Ghost Hawk opens with a description of a young Native American man using a bitternut hickory tree to form the handle of a tomahawk. He places the blade in a natural ‘V’ formed between two branches, and ties the branches together so that they grow around the blade. Eleven years later, the man brings his young son to this same tree and, apologising to it, cuts it down in order to give the boy the completed tomahawk. The young son is Little Hawk who, at eleven, is ready to undertake the initiation ceremony of his tribe which will turn him from boy to man. As well as the tomahawk he is presented with double-lined moccasins and a dangerously sharp knife, which his father received from a white man in exchange for some expensive goods; with these treasures, he is sent out into the wilderness in the middle of winter to survive – and to listen for the voice of his Manitou, or spirit guide. The first section of the book takes us through Little Hawk’s struggle to live through his ordeal, his encounters with wild animals and weather which almost spell his death, and his intelligent way of thinking about the natural world and resources all around him.

Eventually, Little Hawk returns home to find his village utterly changed. In time he meets a white man, Benjamin Wakeley, and Benjamin’s young son John – and these characters become central to the second section of the book. One day there is a terrible accident, witnessed by John, and as a result of what happens that day he and Little Hawk become inextricably linked to one another, their lives tied together in a profound way.

The second section of the book deals with John who – also aged eleven – is sent away from home to become an apprentice cooper. His foster family are kind and welcoming, but the people among whom he now lives are – like the stepfather his mother married shortly before he was sent away – hardline Puritans. They are bent on conquest and the seizing of land from the Pokanoket tribe, and others, who have lived in the area they are now claiming as their own for thousands of years. I found the descriptions of life among the colonists absorbing, even though much of it was familiar from texts like The Crucible; a people running from religious oppression in their own country who take refuge in another, and proceed to destroy it and its people in the name of ‘God’. It made me angry, and sorry, and sad to be a Christian – and I think that was the point. Several characters, such as the sharp-nosed, cold-eyed Ezra, made me want to scream. There are kind and loving people among the New World colonists too, of course, including the Medleycotts, among whom John ends up living, and Huldah, the gentle girl who eventually becomes his wife. but even the most gentle and kind-hearted of them still keep a gun behind the door because ‘…no savage could be trusted’ (p. 291).

I found the book’s conclusion to be profoundly upsetting and ultimately very powerful, despite the fact that it has enraged other reviewers, who wondered what the point of the book had been. I would suggest that the very pointlessness of the plot’s denouement is its point; such is human nature. I didn’t much care for the very end, when the narrative intrudes into the modern day: had I been the author, I would have found another way to finish the story out. That, however, is the only thing I didn’t really enjoy. I found the twist mid-way to be one of the bravest and most effective things I’ve ever read, and I loved Little Hawk, and his grandmother Suncatcher, and his sister Quickbird, and I loved John and Huldah too. As one would expect, a Susan Cooper-penned novel is always a work of beauty, and this is no different; it’s gorgeously written and wonderfully paced, though its historical span and length might make it more a book for teens or adults than children.

However. And this is a big however.

As mentioned above, I have read several commentators who have taken issue with this book and how it ventures dangerously close to ‘white saviour’ territory, wherein a ‘white’ (usually ‘old’ European) character is portrayed as somehow saving the ‘native’, whether it’s by literally saving the life of a character in the text or by playing a central role in a historical event that didn’t actually occur that way in reality. There are some examples of that in this book, including one where John saves the life of a Native American child who turns out to be Metacom, who goes on (in history) to become King Philip of the Wampanoag. Some commentators have taken offence at this, saying that it’s ridiculous to portray a white man as the ‘saviour’ of Metacom; I would respectfully suggest it’s nothing more than a plot necessity in order to work John’s story into that of Metacom and his tribe. I do see why some readers would be upset or offended by the episodes in the book where John inserts himself into tribal business, but there were white people of this period who did learn Native American languages and who did try to bring peace between the peoples, and who – for various reasons – did not treat the native peoples like lesser human beings. I didn’t pick up on any of the controversial points while I read the book, and while I don’t wish to be an apologist for colonialism I would say that I don’t think Susan Cooper was trying to be, either.

What I was left with after I’d finished reading Ghost Hawk was a profound sadness at how native peoples were destroyed by European settlers, as well as sadness at how these same European settlers tore one another apart, all in the name of religion. The book is about how all people are one, and how manmade misunderstandings and lack of common language can cause such huge rifts and such terrible destruction, and how even a small amount of consideration, compassion and kindness can make the difference between war and peace.

So, even though some Native American commentators have, for entirely understandable reasons, decided to come out against this book I would recommend it, and I enjoyed it. It broke my heart into shards, though, so be warned.

For a highly spoilerific (do not read this if you don’t want to have the brilliant twist mid-way through the novel ruined for you!) treatment of some of the cultural problems in the novel, have a read of Debbie Reese’s articles on the American Indians in Children’s Literature website. 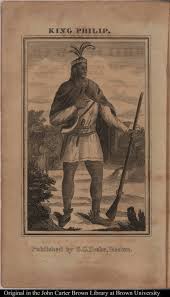 A portrait of Metacom, or Metacomet (a.k.a. King Philip) taken from Samuel Drake’s 1827 history of King Philip’s War.
Image: en.wikipedia.org