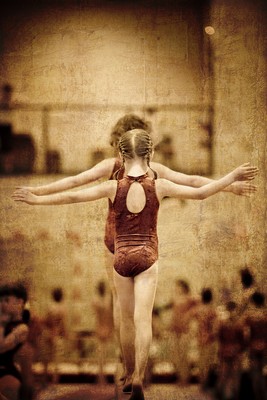 Today’s Flash! Friday image is above; the compulsory concept (which had to make an appearance, though not necessarily the word itself) was ‘clumsiness.’

China In Your Hand

We were like one body – that’s what Mr Hardy said. Tumble, girls! Now, spin! That’s it! I’d do whatever it took to hear his ‘perfect!’, to dismount with my feet exactly right, to see the wide grin on Elizabeth’s face which, I knew, mirrored mine.

Four hours a day, six days a week. More when Regionals drew near.

‘You girls are closer than sisters,’ our teacher smiled. ‘No doubt we’ll see you on the winners’ podium in years to come, eh?’ I wanted it more than anything; I dreamed in gold. My mind was stuffed full of stretches and leaps, tucks and pikes.

Then, Liz started falling. We let it slide for a while – distractions, or lack of focus. But when our rankings began dropping, Mr H took her aside. Her eyes found mine as he told her, but I blinked and looked away.

As she grabbed her stuff and left, I felt, thick-fingered, like I’d dropped something precious.

The state of the world has me in a funk today. Writing can lighten the burden and distract the heart; it can bring brightness to places which have fallen into darkness. It’s not trivial, or pointless, or impractical, or silly. In fact, it’s life-saving. Writing this story gave me almost an hour’s peace, in which I didn’t think about anything painful. Perhaps, though, my feelings about the wider world came out, somehow, in what I wrote – will we ever realise the value of what we have until we’ve broken it beyond repair, and it lies in shards at our feet?

The realities aren’t going away. But maybe, with art and education and compassion, we can bring peace, of a sort, to some. My thoughts today are with all those millions of people all over the world who are less free than me.