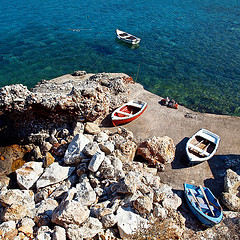 It was one of his little classmates, dusty and sweat-stained and wide-eyed with urgent excitement, who brought word that Rudi was gone. Papi was in the orange grove. Mama was pounding the bread. And I, I was standing by the window playing with my hair, hoping Nico would walk by.

But instead of wild-eyed, black-eyed Nico, I got a child whose mouth barely closed around the words he carried. It was far from a fair exchange.

‘He did not come to class, Senora!’ babbled the child, before he’d even come fully to a halt. ‘He did not come! The master sent me to fetch him, Senora, for a whipping! And you are to come too so that you may learn, he said, how to keep your pups in line!’

The words spilled across the sunlit floor. Spent, the child panted in the doorway, his eyes bright. My mother said nothing, and simply threw the nearest thing she had to hand, which happened to be the smallest of the scale weights. It smacked the unwelcome messenger smartly on the ear, and she nodded, satisfied. She always had a good arm, and a sharp eye.

‘Ow!’ wailed the child, rubbing his wound. ‘What was that for?’

‘You have upset my yeast, with all your yelling,’ declared Mama. ‘It will be flatter than a crone’s bosom at this rate.’

‘So what? Aren’t you going to fetch Rudi? I am to bring him back for afternoon lessons.’

‘Be off! Tell the master Rudi is unwell.’ Mama’d found her kneading rhythm again, and her words wobbled in time to the beat. ‘Tell him he has not left the outhouse all morning. Tell him even the pigs cannot stand to be downwind of him. Say that -‘

‘Oh! Can I see him?’ crowed the child, dancing from leg to leg with excitement. ‘Can I smell him, Senora?’

Mama picked up the next-heaviest scale weight, and the child whipped away from the door. He was gone, whooping, down the path before I could blink.

I sighed. ‘Aren’t you going to look for him?’

‘He’ll be with Papi, or your uncle.’ (Uncle had the farm next door). ‘I have better things to do than try to understand a seven-year-old.’ She flicked a glance at me. ‘As do you, Mariela. Nico will want more in a wife than hair. Go and find some work to do, and start to learn your trade.’

I felt my cheeks burn blotchy red as I stepped outside.

I didn’t want to feed the chickens, or the pigs, or bring water to the flowers, or sweep the steps. None of those jobs involved grace, and all of them involved sweat. When Nico rode by I wanted to be fragrant and flushed pink, hair shining and sweet, not covered in stench.

So I walked down to the harbour, hoping maybe that the wind would pinch my cheeks and make something beguiling out of my hair. Perhaps I would see Miguel among the boats and perhaps, this time, I might permit him to take the kiss he’d wanted from me for at least six months. Perhaps word of it might reach Nico’s ears.

I smiled at the thought, and walked faster.

But the harbour was deserted. The boats were in, and empty, the catch long gone. I scuffed my way to the water’s edge and sat, the tang of the ocean scrubbing at my lungs.

Far offshore – almost too far for me to see – a boat lay drifting. It looked unmanned. I could make out no trailing mooring rope, nor any oars nor movement, and the current carried it far out as I watched, too far for rescue, and almost too fast to believe.

There was nobody to tell, no alarm to raise. Someone’s livelihood would suffer, but what could I do? I was merely me, Mariela, and nobody was there to help me.

I walked home, unwatched and unwanted.

Dinner sang in the oven, and still no Rudi came. Papi returned from the grove, and no small shadow haunted his. Mama went to Uncle’s house but came home alone.

Then Mama packed some food for Papi and he went out from house to house, asking for his son. Mama ran to the square to search each face, to ask ‘have you seen him?’, and to spread the word. I stayed at home. I thought only of Rudi, but I brushed my hair until it shone like silk, just in case.

It was not until the night was at its thickest that I thought to remember the drifting boat, the one which had been deliberately untied and left to the mercy of the sea, the one which had looked empty – maybe because the person inside it had been smaller than a bundle of sticks, and hiding because the whole thing was a great adventure, like the ones in the comics he saw for sale outside the drogueria. Papi slapped me when I told him, but I kept my weeping inside.

We stumbled to the shoreline in the dark but all we saw was empty, open water, and one boat missing from the dock. We sat until the morning came, but all trace of boat and boy were gone.

Later that same day, I cut my hair up to my skull, like a small child’s. Nico never looked at me again. And Miguel? He found his kisses elsewhere, after that.