This morning, as I lay approximately one-eighth awake wishing I didn’t have to get up and face a cold, dark day, I found myself thinking about a picture book idea. It involved a witch with an itch and a crooked wand, and it was (at least, to me) very funny. I created the story as I went, imagining the illustrations and enjoying how my witchy character grew more and more exasperated as things went on – and it was huge fun, even if I had to get up before I finished it. 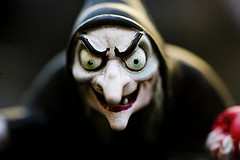 I’m not a person who wants to write picture books, particularly. Besides the classics, I haven’t even read very many picture books, and it’s something I keep meaning to remedy (the most beautiful one I’ve ever seen, in case you’re interested, is Journey by Aaron Becker, which should be checked out immediately by everyone). I think a good picture book is a thing so difficult to pull off that it’s practically impossible, and I feel it’s beyond the scope of my skills – but my mind still decided to explore an idea for one while in a hypnopompic state.

The reason for this? I love stories for children. I love them so much that I think about them even when, all told, my brain would rather be unconscious. I think about them even when I’m supposed to be grown-up and thinking about other things like bills and taxes and the economy and politics and other stuff I know nothing about. Yesterday, I was unwell – sore throat, fuzzy head, sniffles, and a serious case of the ‘OhPoorMes’ – and as well as taking plenty of fluids and as much rest as I’d let myself away with, I self-medicated with stories. I read Howl’s Moving Castle, just because there’s a scene in it where Howl the wizard has a cold and makes everyone suffer because he’s a crybaby. I feel better today, and I’m sure the paracetamol in the medicine I took made a big difference to the state of my health, but I know that reading did the rest.

Once, I met a lady who had written a book for children. She wasn’t sure what age range, particularly; she thought perhaps children from twelve and up, because there were things like war and slavery and family breakdown in her story (it was historical fiction). However, its word count was way too low for this age range, being more suited to children between five and eight. She was shocked to learn that twenty thousand words wouldn’t create a book long enough for her target audience, and even more shocked when I asked her what her favourite children’s book was. ‘I don’t read children’s books’, she told me, half-laughing at the very idea. ‘I’m more of a romance fan, myself.’ She paused, frowning slightly as she thought about it. ‘In fact, I really wanted to write this story as a romance about one of the older characters, and I’m not really sure why I wrote it this way,’ she said, looking confused.

And I thought: Why don’t you write romances, then? If that’s your heartsong, why aren’t you singing it?

I wouldn’t tackle a picture book not because I don’t enjoy them, but because I’m not immersed in that world. I’m not obsessed with picture books, with the making and creating of them; I’m not expert in the field (and if you think there’s ‘nothing to making a picture book’, then I invite you to try to make one). I love books for older children – they are what I read, what I love, what I admire. I haven’t read everything, because there is only so much money and time in the world, but I’d like to think I have a fairly broad exposure. Stories about adventure, and friendship, and challenging the odds, and fighting evil, and finding parents, and learning to live without parents, and learning what it is to be an individual, and how to trust yourself, are what my heart sings. That’s why those are the stories I write, too.

Writing involves a lot of different skills, all interconnected, but one of the most important is this: knowing what your heartsong is. Knowing how to be still and listen to yourself, and hear the whisper of the story that lies curled up inside you waiting to unfurl. It doesn’t sing with a very loud voice, sometimes, particularly if you’ve never tried to listen to it before, but it is there. If you can gently encourage it – and not drown it with thoughts like ‘I can’t write a story like this, it’s stupid/silly/inappropriate/unreadable/wrong‘ – perhaps you’ll be lucky and it will grow stronger, and clearer. Let it grow whatever way it wants – don’t try to force it to go one way, or another. Give it space and time and freedom, and allow yourself to astound yourself.

Read widely – particularly within the genre in which you’re writing, but not exclusively. Learn how stories work by reading how other people do them. Don’t write something in a particular way because you feel you ‘should’; write it whatever way it wants to be written. Become a reader before you become a writer. Don’t limit yourself. Don’t write to markets. Learn to listen carefully, particularly to yourself.

Write what you love.

Love what you write.

And let your heartsong burst forth, loud and clear.