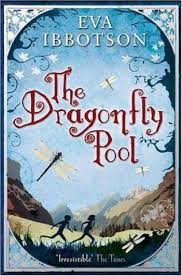 This was a delicious book, one which I couldn’t help reading whenever I got the chance, and one I looked forward to coming back to in the quiet of evening. It’s so well written; the skill with language here is remarkable, the sentences perfectly cut and rhythmically perfect, complete in every detail. As well as that, it takes as its setting a very serious and painful era of human history and makes it into something beautiful, and full of hope, and I love it for that reason alone.

The Dragonfly Pool is the story of Tally (full name: Talitha, named for her great-grandmother, a woman of such fortitude that she used to physically remove the socks from the tramps on the London underground and wash and dry them before returning them), her family, and her life at school, all set against the opening days of the Second World War. Tally’s father is Dr Hamilton, a man more interested in the salvation of his patients than in earning money, so they are well-respected and deeply loved by their neighbours and friends, but quite poor – not that this bothers Tally in the least (at least, not in terms of acquisitiveness). She also lives with her father’s two elderly aunts who have raised her since infancy, as her mother died when Tally was only a few days old. When the war opens, all the adults in Tally’s life realise that they will have to send her away from London in case she is injured in the fighting, and the story begins by taking us through the sorrow felt by all of the people Tally knows as they think about losing her, and how much they will miss her – all before Tally herself has been told that she must go away. I loved this strange, oblique and moving way of showing the reader how much Tally means to everyone around her, and how much she has brought to her small corner of the world.

Tally is offered a scholarship to a ‘progressive’ boarding school in Devon called Delderton, and at first she is hugely resistant to the idea that she might like and enjoy it there. She knows she will miss her family cruelly, as well as the city she has grown up in and loves, but she submits to her father’s wishes and allows herself to be taken away on a train full of strange, alternative-seeming children, all of whom are fellow students at the school. As soon as she arrives, though, she is struck by Delderton’s beauty and its liberated teaching methods, designed to bring out each student’s individuality and potential, and while it takes her some time to get on board with it all, she soon finds herself warming to her new life.

While at school she meets many friends, including a girl named Julia with whom she goes into a nearby town one day to watch a film. The film, Tally thinks, isn’t up to much, but the newsreel beforehand – which shows a clip from a country called Bergania, a tiny European nation which is bravely standing up to Hitler and his advancing army – catches her attention. When, a few weeks later, a chance emerges for Tally and her schoolmates to travel to Bergania on a cultural exchange, she works hard to convince her headmaster of the merits of the trip, and so they set off. Little do they know that their presence in Bergania at this particular juncture in that country’s history will end up changing the course of that history, as well as Tally’s life and the lives of everyone she knows.

The book’s setting is so unusual – not many children’s books set during WWII are this beautiful, this positive, this hopeful. Bergania may not be ‘real’, but its spirit is; every Allied nation which stood against the encroaching Nazis is reflected in Ibbotson’s depiction. I adored the way Ibbotson paints the German people, too, and how she takes several opportunities to make it clear that ‘German’ does not equal ‘Nazi’, and that the average German person was not necessarily a facet of the evil of their ruling party. She shows the suffering of German children alongside that of Berganian ones, and British ones, and children of all nationalities, and she shows with great skill the power of unity and the ability of friendship and fellow-feeling to overcome all obstacles. She also takes the idea of royalty, in the person of Karil (the crown prince of Bergania), and shows how when these constructs of status are stripped away all that is left behind are flawed, insecure and frightened human beings, children – like Karil – who need help and a loving family and who, finally, eventually, receive what they are looking for. She shows the power of a good teacher, and how one invested and interested adult at a crucial point in a child’s life can do so much good, and she explores the importance of being oneself, and allowing one’s individuality to shine through.

All this, and a cracking story, too? Well. It is Eva Ibbotson, after all.

The only tiny thing which bugged me (and this happened with Journey to the River Sea, too), was that Tally was a little too good and perfect for my liking. Maia, in Journey to the River Sea, was just the same: absolutely ideal in every way. I kept hoping Maia would throw a hissy fit, and in this book I kept willing Tally to lose her temper or say the wrong thing to the wrong person and have to try to make amends for it later – but that’s such a small quibble in such an accomplished book. If you haven’t yet made room for Ibbotson in your life, you really should – and you can’t go wrong if you start with The Dragonfly Pool. It’s fast become one of my all-time favourite reads.