Y’all will have to forgive me a little horn-tooting here, this morning. Not that I’m one to brag, normally, but when a long-time goal is achieved, I think it deserves a little mention, don’t you? 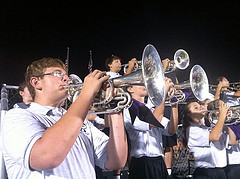 So, on Monday, the winners of last week’s Flash! Friday were announced. You might remember, if you’ve been paying attention, that I actually managed to dredge a story out of my brain last Friday and submit it on time. It was one of those moments where the prompts struck off my inspiration like a tuning fork, and I thought: Hmm. Yes. I think I know what I’ll write about here.

Of course, I was convinced of two things: one, that the idea I had would be used to death by other people (and written about much more effectively) and two: that I would come nowhere near the winners’ podium, as it had never happened before. (Well, I’ve been Runner Up a few times, but that’s not the same).

Not that winning is the point, kids. It’s not. Taking part is the best bit, and creating a new story out of nothing is pretty fantastic, too, and that’s not to mention how great it is to get to share that story with so many other wonderful writers, all of whom are just trying to improve and have a bit of fun while they’re at it. That’s what’s important.

(But, come on. It would be nice to win, just once. Only human, and all that).

So, I took my twisty little idea and I crafted a short tale out of it, and I sat back and told myself it was actually pretty decent. Not the best piece of flash fiction ever written, but certainly one I could stand over and be proud to call mine. And so, I did the necessary, got it submitted, and went about the rest of my life.

And then, after a very long and very hard day on Monday, a whole pile of Twitter notifications started to pop in. So, intrigued, I checked.

And. I had been and gone and done and won the darn thing, for the first time, after two years of competing. Better late, I can tell you, than never. My story, Judge, Jury, Executioner was judged the best of the stories entered for last week’s competition, and I was really, truly delighted. I was delighted firstly to have been judged the best by my peers for that week, but I was even more delighted to have won the competition with a story I really liked, and one which meant something to me. It’s a feeling like no other when you get an idea, and you feel it transmuting in your mind as you think about it; a deep level of your consciousness knows what to do with it, and starts to form it into something else, something you didn’t expect, before your very eyes. Things you’ve read, or heard, or dreamt of, all come to bear on one tiny piece of fiction, and it pops out of your fingers like something which has always existed, and you just know this is a story. This is something which owes its roots to the culture in which you were formed, but which is new, and fresh, and which is adding a different thread to the tapestry. Judge, Jury, Executioner is, for me, a story like that.

It’s only 209 words in a very big internet. It’s a tiny artefact of culture which will fade and be lost before long, like everything we humans create. But, for now, it exists, and I’m proud of it.

But life goes on, as go it must, and I have many things to do today, so I’ll have to hurry you up. I’m only going to be signing autographs for the next hour or so, okay, so get in line and wait your turn, all right? Make sure to have your name written out clearly on a piece of paper so that I don’t actually have to ask you how to spell it, because we big-shot writers can’t be doing with anything like that, you understand, and I’ll get to you eventually.

16 thoughts on “Form an Orderly Queue”