Recently, a woman I hugely admire posted the following Tweet.

Also recently, another woman – not known to me personally – announced that she was taking a break from Twitter because she had received a barrage of death threats, from men, simply due to a rumour that she was slated to take over presenting a TV show.

I don’t normally get too deeply into my feelings about feminism, and things like that, on this blog (I tend to keep that sort of stuff for Tumblr), but there are times you just have to say: enough. This is enough. In fact, it’s more than enough.

A year ago yesterday, the girls of Chibok were taken from their families and loved ones by a group claiming religion as a valid reason for their abduction. Nobody really knows what has happened to the majority of these girls and young women, but one can guess that they have suffered some sort of sexual violence, or been married off against their will. They may have even been sold into slavery. Nobody seems to care. 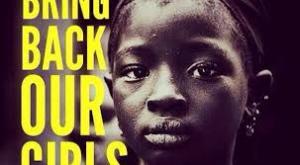 Earlier this week, a woman in my own country waived her right to anonymity in order to name the abuser who destroyed her childhood – a man who was her mother’s partner, but who made her suffer unspeakably for a very long time.

Another woman, again in Ireland, who took a high-profile case against her own father for years of abuse suffered at his hands (and who went back to court to argue for a more severe sentence when the original one handed down was decried nationally as a disgrace) had a pipe bomb placed beneath her car. Luckily she, her husband and her family survived without injury.

I could go on.

Why is this happening? Why do things like GamerGate happen, where women who have the temerity to work in a male-oriented environment become objects of vitriol by certain men, who feel entitled to threaten their personal safety and sexual autonomy to the point where these women have to leave their homes and uproot their families? Why is sexual violence bandied about online as a threat whenever a woman dares to have an opinion? Why don’t the people responsible for this sort of hate speech (because it is ‘hate’ speech, not ‘free’ speech) understand, or care, that their words cause fear and pain and disruption? I sometimes wonder whether the people responsible for this sort of threatening language genuinely don’t see it as ‘serious’; perhaps they view it as being no more realistic than threatening to smash someone’s head in during a pub brawl, where both parties know it’s simply ‘big talk’. Well, it’s not just harmless blather. It’s causing real pain, and real fear, and achieving nothing.

Deeply misogynistic, troublingly sexual threats are made against women in the public eye every day. Men might suffer people disagreeing with their point of view, or being called an idiot or all manner of offensive or upsetting names (and I’m not saying this is right, either) if they put forth an unpopular viewpoint online, but it is overwhelmingly women who suffer death threats, and whose personal safety is jeopardised, and whose privacy is violated. This is not right. It shouldn’t be acceptable. People are fighting back, and spending five minutes on the Everyday Sexism Twitter feed will illustrate that more than handsomely.

But sometimes I wonder whether any of it is working. Sometimes I wonder whether the men and women who stand up for equality between the sexes are actually being listened to. Does anyone remember the threats made against the actor Emma Watson last year when she launched the UN’s equality campaign, HeForShe? I do. Threats were made to ‘doxx’ her (post her personal information, like her address and telephone number, online, a common tactic against women in the public eye) and leak naked photographs of her. This sort of violation has happened to other famous women, for no reason besides – apparently – the fact that they are women, who are deemed attractive, and hence seen as ‘public property’.

I just don’t know how to wrap my head around a world like this.

I hope we do, one day, see an end to a way of thinking which assesses a woman’s beauty before her ability to do a job. I hope we see a world wherein a woman can declare her intention to run for President of her country without anyone feeling the need to comment on her unsuitability because she is a grandmother. I hope we live to see a world where women are seen as people, and not just pretty objects to be looked at. I hope I, personally, live to see a world where women are neither deified as ‘perfect goddesses’ by virtue of their roles as mothers or potential mothers nor reduced to the level of an animal if they dare to express their sexuality, or own their power, or live up to their potential. I want a world where women can sit, in equal numbers to men, in boardrooms and houses of Parliament and courts of justice in every country, and where their words will be listened to and considered with the same respect that would be offered to a man. I don’t want any more women to be able to share anecdotes of oppression from the workplace, of being ignored at meetings or having men take credit for their ideas or having implications made that their jobs are dependent on them staying single, or not having children. I want to see a world where women, all women, have choices, and where those choices are respected – and where, when criticism is levelled at them, it is levelled because of something they have said, or done, or stood for, not simply because they’re female, and where that criticism is respectful and refrains from sexual threat.

I want women to stand with other women, and not tear one another down in an attempt to gain traction with, or acceptance by, a man – or, indeed, for any reason.

I want a lot, I know. What I want more than anything is the courage to make a stand in my own life to bring these things about, in tiny increments, in everything I do. Perhaps that, I can achieve.