That’s the sound of me mixing it up around here, just in case you weren’t sure what you were listening to. I’m aware, of course, that this is a Tuesday, and that it has become my habit to blog on Mondays, but yesterday I wasn’t feeling one hundred percent well. So, my blog had to fall by the wayside, just once.

It wasn’t the most enjoyable experience I’ve ever had, but it does give me the chance to use this nifty mixer-upper tool. Fwish! I could get used to this, you know.

Think of me like Zorro. Except female. And short. And prone to toppling over unexpectedly. 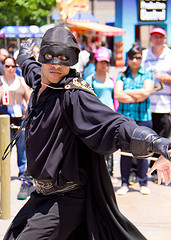 In fact, actually, don’t think of me as Zorro. That was stupid. Let’s start again.

Right! Hello! How’s your week going so far? Mine’s going fairly well. Now that I’ve recovered somewhat from feeling woeful, that is. I’m writing again – it’s going slowly, but it’s going. I think *crosses everything* that I have the bones of a fairly decent story beginning to form, but in writing you never really know whether your story is going to work until you write it. What might seem shiny and bright and fantastic in the planning stages may turn out to be rickety and rotten underfoot as soon as you put any weight on it. Of course I hope this won’t happen, but (as I never tire of reminding myself) in this game, there are no guarantees.

This is the thrill, and the risk, and the heart-crushing sorrow, of trying to create something from nothing. It’s a feeling I’m all too familiar with. For whatever reason, during this year so far almost everything I’ve started has ended before it was supposed to – in terms of writing, at least. Ideas have sputtered out and stories have whittled away, fading down to an embarrassed throat-clearing noise as the universe reshuffles, hoping nobody noticed the big enormous failure that has just happened. I feel a lot like everything I’ve tried to do this year has been akin to fumbling in a darkened room, where there are scary, nasty (and quite possibly dangerous) things hidden in the murk, lurking beneath dusty sheets. Sometimes discovering these things can be good – once your heart rate returns to normal – and sometimes they can be bad. Sometimes, they can be the death of your tiny storylet, and that’s a dreadful feeling.

So, I’m fully prepared for this new story to go the same way. But I’m also hopeful that it won’t. On the plus side, I think I have mastered one important thing, which is the voice of this tale; once I have that, I think the rest of it will slot together, eventually. Finding the right register for your characters is, for me, a prerequisite to telling a tale – you want a tone which expresses their individuality, hints at their world, seems to ‘fit’ them and their personality, and it’s much harder to do than you’d imagine. Often, the first ‘voice’ you start writing in isn’t the right one; I’ve had this happen more often than I want to remember. Also, once you’ve begun a story in one ‘voice’, it can be really hard to see your way through to writing it in another, and your desperation to get it ‘right’ can sometimes be its undoing. And then sometimes, as with ‘Emmeline’, the voice hits you right away and the story practically tells itself. I’m not expecting that to happen again (I think what happened with ‘Emmeline’ was a once-in-a-lifetime thing), but it would be amazing if I could just keep going long enough to build a firm foundation for this idea, something which grows stronger with every addition instead of more tangled and confused.

Let’s hope for the best.

Fwish! I’m off. Have good Tuesdays, all y’all. Feel good. Try to keep your eyes on the happy stuff, for without it we are all lost. Create something. Give something. Share your brightness with another. That way, maybe there’s a chance for everyone to rise.