I don’t think I’ve ever been as amazed by any social phenomenon as I’ve been by the #HomeToVote hashtag on Twitter.

#hometovote is making me feel a bit over emotional this morning. So brilliant.

Today is the day Ireland goes to the polls to vote on whether we should allow people who are twenty-one and older to run for President (currently, one has to be thirty-five or older to run for that office), and whether we should extend the rights and protections of civil marriage to same-sex couples. They are both important issues, but I think the latter is the one which has drawn so many people home, and which has seen over sixty thousand people register to vote for the first time.

Honestly, I’m flabbergasted by the whole thing. In the best possible way.

In a little over twenty years, we’ve gone from a country where homosexuality was illegal to a country where thousands of people are streaming home for a flying visit simply to vote – let’s hope! – that same-sex partners can get married, and be considered equal under the law and the Constitution to their heterosexual brothers, sisters, cousins, coworkers, and friends. I have seen arguments to suggest that holding a referendum, or a popular vote, on an issue which should be one of human rights (and therefore above a mere vote) is an inappropriate thing to do, but in Ireland, we have no other way of doing it. To amend our Constitution, we must hold a referendum. And to give same-sex couples the same rights as everyone else, their right to marry must be enshrined in the Constitution. It does make me uncomfortable that I, as part of the heterosexual ‘majority’, have the power to essentially bestow a human right upon my fellow citizens, but I hope that – should the ‘Yes’ vote carry – it will be seen as solidarity, as brother- and sisterhood, and not a patronising gesture.

In any case, whatever happens today, I have never been so emotionally moved by any electoral or referendum campaign, and I have never been more amazed at the people of my country, and overwhelmingly the young people of my country, at that. I will be so proud to take my place in line today (for queues are forming at polling stations! I’ve never seen the like!) and cast my vote, in the full and certain knowledge that I am living in a democracy, and that the people – when they truly rise up and claim it – have power beyond measure.

It almost makes up for the Eurovision. Almost. 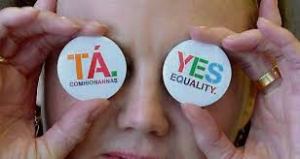