Kate Saunders’ exquisite novel, Five Children on the Western Front, won last year’s Costa Book Award (as well as the Costa Children’s Book Award), and you only have to read the opening chapter to know why. 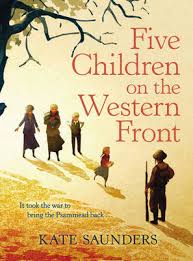 I picked this book up while browsing in a bookshop a few weeks ago, and – as I’m wont – I read the first few pages. Instantly, I was dragged in, just as I was dragged in to Five Children and It, the masterful ‘source’ story by the ‘Ur’-children’s writer, E. Nesbit, first published in 1902. Beginning Saunders’ novel was like picking up a conversation with a dear friend.

I read to the end of the first chapter of Five Children on the Western Front, and by that time I was in tears. Right there in the shop, and everything. I didn’t even care. I knew I had to own this story, and so my love for it began.

The book opens with a scene which is reminiscent of one from Nesbit’s The Story of the Amulet, her last tale featuring the Pemberton siblings (Cyril, Anthea, Robert, Jane and Hilary (or ‘the Lamb’)), wherein the children are whisked forward in time to catch a glimpse of what is to come. I have never read The Story of the Amulet and so I wasn’t aware until afterwards that Saunders had picked up on this detail, but somehow this level of engagement with the world Nesbit created didn’t surprise me. It’s the perfect place to begin this last instalment of the story, as it’s incredibly moving to be faced with the realisation that was so clear to Saunders – and which inspired her to write this story – that the fictional Pemberton children would have been just the ‘right’ age to have been swept up in the cogs of the Great War. This glimpse into the future in Amulet – seen by Nesbit, no doubt, as a glorious end to her sequence of tales – took on a different hue as history unfolded.

Saunders’ version of the Pembertons sees another addition – little Edith, or Edie, born after the Lamb and the new Baby of the family – and the re-emergence of the Psammead, or the Sand Fairy, who got the children into such scrapes when they were young. The Lamb and Edie have grown up on tales of the Psammead and how the ‘Bigguns’ (as they refer to their older siblings) had such wonderful adventures with him, and have always felt left out that they were too young to be included. To everyone’s surprise – not least the Psammead’s himself – the Fairy reappears just as the First World War breaks out, on the day when Cyril is to be deployed to the Front. The family is gathered to send him off, as cheerily as possible, and the Psammead needs a bit of convincing to understand that this fine handsome young man in his officer’s uniform is the same small Cyril he remembers, and this lovely young lady with her hair swept up is his Anthea, now an art student. There must be a reason why the Psammead has reappeared – but nobody knows what it is.

Stranger still, the Psammead’s magic appears to be on the wane. He can’t grant wishes like he used to, and when he does manage to spirit the children into visions and adventures, there’s something slightly odd about them; they’re not the carefree japes of the earlier books. There’s a purpose and a reason behind them all. For the Psammead has his own backstory, which we discover as we read, and the reason behind his reanimation in 1914, at a time of huge upheaval and pain, gradually becomes clear. The Psammead has a debt to pay, and he must learn how to pay it. His charming arrogance, so clear from the older novels, is intact here, and though he’s dearly loved by the children (particularly Edie, who grows firmly attached) there is an undercurrent of nastiness to the things he has done in his long-ago past, and for which he must atone. His struggle is tied up with the struggle of the war, and the lessons he learns are reflected in the realities of life in Europe in 1914-18.

This book is a masterpiece. Kate Saunders has managed at once to retain and build upon E. Nesbit’s voice while creating a new story out of Nesbit’s characters, who are so dear and familiar to anyone who knows and loves the original book and its sequels. It’s a remarkable achievement. The tone, language, setting and ‘feel’ of the book is identical with the original novels (with the exception of being slightly less ‘scattered’ in its plotting; Saunders’ work is definitely more structured than its earlier counterpart) and the characters feel seamless. At the same time Saunders has written a profoundly moving anti-war novel, which brings home the reality of losing loved ones to a distant war machine like nothing else I’ve read. The boys are enlisted; the girls go to fight in their own way, signing up to become volunteer nurses (and, because they’re ‘high-born ladies’, being disparaged for it); the children and the parents are left to worry and grieve. The novel takes in every relevant theme, including social class, the shattering effects of war on society (not just in its human toll but in terms of how it destroyed the fabric of reality, in so many ways), the devastation of loss, the hope of new love, the devotion of family, and the grim truth of life at the front. All of this is done without dwelling on the gory reality; the book is not ‘bloody’ or graphic. But it doesn’t need to be.

I’m not a bit ashamed to say I wept reading this book. It affected me in a very deep way, particularly as it drew to its magnificent close. I lost count of the amount of times the story brought tears to my eyes, but the end was devastating; and yet, devastating in a wonderful way, a way which reminded me of how much beauty there is in the world, and how important love is, and how we must never forget the war – any war, all war – and those who fell in it. During this centenary period it’s particularly important to read books like this one, and particularly important to encourage children to read books like this one, but I know this beautiful, powerful story will be read and loved for generations. It’s a marvel. You need to read it.

‘I’d still be fast asleep at this moment – if you children hadn’t woken me up all those years ago in 1902.’
‘I say, don’t blame us,’ the Lamb said. ‘We didn’t ask you to pop out of our gravel pit.’
Ernie had been writing rapidly in a notebook. ‘The children might’ve woken you with the power of their imagination. It must be very strong when the kids love stories as much as this lot do.’
‘No, I think it’s simpler than that,’ Jane said thoughtfully. ‘I think you were attracted to us because we were happy and we loved each other. It sounds like a small thing, but I can see now that it’s the biggest thing in the world. That’s why you came back to help us when the war broke us apart.’