So. Been a while, right? It feels like forever since I’ve swept my way around Clockwatching… towers, but it’s only been a couple of months (not quite the eighty days of the title, but c’mon. It was too good not to use). Thanks to you all for sticking with me (my stats have been booming, guys! Love to all y’all) and for being interested in what I’m doing and how things have been for me and my little family.

Well. In short, things have been great.

Great and terrible. I think anyone with a new baby can relate. We’ve had nights of relentless screaming, and we’ve had moments of pure panic, and we’ve had instances of utter and complete raglessness (as a friend put it, very aptly) when I’ve managed to lose my head completely. I’ve been down the road of Post-Natal Depression, and I’ve realised that I’m not as strong nor as naturally maternal as I always assumed, and I’ve learned that there’s nothing wrong with admitting that things are getting overwhelming  and you need help. I was terrible at accepting help before the baby came along. Sometimes, though, you just need to let someone else do your dishes or sweep your floor, no matter how much it pains you.

I’m very lucky to have had immense amounts of help from family and friends, and to have years’ worth of wisdom to draw on from people who have been here before me. So thank you to everyone. There are a couple of friends (no names, but they know who they are) who’ve been particularly amazing. So cheers to them both. Neither me nor baby would be in quite such good shape without my little backing crew – and boy do I know it! 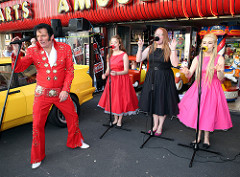 Everyone needs their backing crew – even the King. Photo Credit: Lawrence Chard via Compfight cc

But things have begun to get back to normal. Baby is getting older, and more settled, and we are all getting used to one another. Routines are being established. Smiling has started happening – and not just the sort of smiling one gets from a baby with a full stomach, but the sort that says ‘I see you. I know you. You’re my family.’ Any amount of sleepless worry is worth that tiny flicker of love. We’ve bought a baby sling – a cloth carrier – which Junior seems to enjoy (fingers crossed) and we’re experimenting with cloth nappies, which hasn’t been going so well.

But enough about that.

I’ve been learning lots of new skills, too (as well as not forgetting my old ones; I was terrified I’d have forgotten how to type, or spell, or think – but luckily all seems intact!) and discovering that having a baby really prepares you for so many different sorts of career paths. If the writing thing goes belly-up, I feel vastly qualified already to do any of the following:

Mind reader: Because when you spend most of your time interacting with a person who is non-verbal and whose idea of a good conversation involves screaming, flailing, dribbling, fixing you with a series of intense stares, and fairly random body convulsions, you get good at interpreting thought patterns. (Or just making use of guesswork. Who knows?)

Interpretive dancer/mime artist: Until you’ve caught yourself dancing round your kitchen to ‘Mary Had a Little Lamb’, making gooey faces and accompanying your vocal performance with limb twitching, you haven’t lived.

Animal wrangler: Babies eat. A lot. All the time. Around the clock. This means they need to be fed at night. My baby does not like waking up at night to feed. It happens, however, despite Junior’s best intentions, and after hours of moaning and groaning and snuffling and whuffling and kicking off of blankets, eventually baby comes to and instantly – instantly – the wailing for milk will begin. Now. Trying to balance a scarily strong infant on one knee while warming up a bottle (which involves dealing with boiling water in the dark, which is always fun) and attempting to get the milk down said infant’s neck without scalding someone and/or the infant back-flipping out the bedroom window is a true skill. I feel fully prepared to take up a job as a weasel wrestler any day now.

CIA operative: Admittedly my knowledge of what CIA operatives do is largely based on watching ‘Homeland’, but it seems to involve withstanding torture a lot of the time. Listening to a colicky baby screaming for hours on end will prepare anyone for that. Believe me.

Land speed record holder: For when you’re downstairs and the baby monitor informs you of disaster unfolding upstairs, or you’re in another room (taking a Xanax, perhaps) and you hear the air-raid siren warming up in its bassinet, you run. You run. And after a while you get pretty fast.

Lip reader: When you’re silly enough to try to watch TV with a baby, you need to be able to lip read. Go figure.

Statistician: Anyone who has ever spoken to a new parent will agree on one thing: they talk about poop. A lot. How often the baby goes. How long it takes. What colour it is. What consistency it is. The sheer power of its aroma, based on how similar it smells to the Bog of Eternal Stench. And so on. We’ve taken to keeping a poop log (no sniggering down the back) where we record times of poops and what sort they are. We also have a feeding log. We like to map the data. In graph form. Don’t judge us, for we are nerds.

Somnambulist: Not that this is a job, per se. But it’s definitely a skill. I walked up and down the stairs without opening my eyes once, and didn’t realise I’d done it until I was back in the baby’s room. Sort of scary, but a bit impressive too.

Anyway. One thing you’ll note is, of course, that having a baby doesn’t exactly lend itself to writing. I haven’t written anything longer than a Tweet for many many moons. My WordPress back-end has changed beyond recognition, and I’m feeling at sea even on this blog, my safe place. However – there is light at the end of the tunnel. Perhaps I speak too soon, but – here it is, whisper it – I’m getting the hang of this parenting lark.

So. Before too long I hope to be back to a semi-regular schedule. I hope to get back to work. I have ideas still pinging into my dried up little brain – not so many, and not all good, but they’re coming – and so I hope to have time, and something to write about, as the new year rises.

Until then, wish me luck. And thank you for still being here. It does this tired mama’s heart good to see it. Adios, till next time!