In case you hadn’t heard…

There’s a brand-new Festival in town!

I mean… I need to sit down after all that excitement. While I’m recovering, here’s a photo of the fab Alan Nolan, on the hunt for stories (as is his wont). Loads of the events have already sold out, but never fear. There’s so much more still to explore. If you (or your grown-ups) have access to Zoom, then you’re all invited to take part in WonderFest. It’s going to be WonderFul, and so much fun. Get your tickets through the website, tune in at the right time, and a world of Wonder awaits…

So. Back to my recollections of the Rebels and Rulebreakers Conference, held this past weekend in Dublin.

In yesterday’s blog, I told you about Hervé Tullet’s masterful performance of his book ‘I Am Blop’ last Saturday, the first day of the conference. M. Tullet also gave us a peep at his forthcoming book – the most charming picture book I think I’ve ever seen – and reminded us of the importance of having a ‘hole’, or a gap, in a book which the reader needs to fill. One of the things I learned from his presentation was how important it is to bring the reader into the book, and give them the space to interact with it and bring it to life – not just the story, but sometimes also the book itself. He showed us a book that could be taken apart to make a sculpture, and a book which could be used (with the aid of a torch) to make shadow-patterns on the wall. Watching this made me wish I was a child again. Or, better, it made me feel like a child again. It takes a particular kind of magic to do that.

In short, I was charmed. It was a marvellous, vivid and engaging presentation, and even though picture books for very young readers aren’t my particular area of interest, for the duration of M. Tullet’s talk, they were the most important thing in the world. I’m looking forward to the next time I need to buy a gift for one of the many children in my life – I know exactly what to purchase!

The next session of the day came after we returned from lunch, when we had the great privilege to witness John Boyne (he of ‘The Boy in the Striped Pyjamas’) be interviewed by Robert Dunbar, a luminary in the world of children’s books in Ireland. The speakers were wonderful, the questions apt and interesting, and Mr. Boyne was an engaged and warm interviewee. A discussion ensued regarding the differences, if any, between writing for adults and writing for children, and the question of ‘is writing for children the same as writing for adults, except the central character is a child?’ was raised. Certainly, books for children have just as wide an emotional sweep and just as much significance as books for adults, and the consensus seemed to be that there wasn’t a lot of difference between the two. Mr. Dunbar noted that a lot of Mr. Boyne’s child protagonists are boys of between 8 and 9 years old – of course, this was significant, as that was an important age for the author, the age at which he first began to write and think about stories himself. Mr. Boyne spoke frankly about his ambitions as a young writer, his time as a student on the legendary Creative Writing course run by the University of East Anglia, how he copes with critics, and his need to finish one piece of work before moving on to the next. As well as taking us through his writing life – including his many novels written for adults – we were treated to a reading from Chapter One of his forthcoming novel ‘Stay Where You Are, and Then Leave’, set for publication in September or October of this year.

I was delighted to be able to purchase a copy of ‘The Terrible Thing that Happened to Barnaby Brocket’, Mr. Boyne’s most recent children’s novel, after this talk – and even more delighted that he agreed to sign it for me. 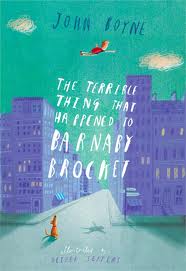 The next session was a three-person panel focusing on comic books and graphic novels, an area in which I have very little knowledge. My expertise in graphic novels is pretty much limited to Neil Gaiman’s ‘Sandman’ series, so I was looking forward very much to getting An Education in this particular field. The panel – Sarah McIntyre, Alan Nolan and Rory McConville – didn’t fail to deliver. I busily scribbled down recommendations for books, graphic artists, writers, and in particular graphic novels aimed at children, all the while enjoying the panellists’ colourful personalities and the displays of their work. Several of the speakers during the course of Saturday, including these three contributors, spoke of how they began their careers as artists and/or writers by copying the work of those they admired; just as these artists copied their favourite comics, panel by panel, so writers take characters from books they love and create new stories for them. I did this as a child (funnily enough, a child of 8 or 9!), and it seems I’m in good company.

The final panel of the day was given by Alex T. Smith, an illustrator and writer whose wonderful series of ‘Claude’ books have become hugely popular and dearly loved. 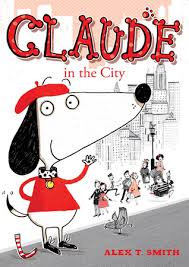 Mr. Smith took us through his creative life, sharing a moving story about his late grandfather who encouraged the young Alex to draw and write from a very early age, and who showed him the power of stories through his own example. He shared with us how his grandfather would write him stories, which would be waiting for him when he came home from school each day, and how inspirational this small act of love was on his whole life and career. With regard to ‘Claude’, we learned that one evening, Mr. Smith sat down with no particular inspiration in mind and drew a picture of a small dog with a beret and a jumper, sitting at a café table ‘as though he was just waiting for me’; that little dog, and his faithful friend, the enigmatic and debonair Sir Bobblysock, have now become the stars of six books. Mr. Smith emphasised the importance of adding humour to everything you write for children, particularly children between 5 and 8 years of age, reminding us that jokes not only help the child to enjoy the book but they also make it easier for parents, who often have to read the same story over and over. A few jokes – perhaps jokes that only a parent will understand – make the experience more fun for everyone.

Mr. Smith also reminded us that if you’re interested in producing creative work, it’s vitally important to infuse it with your own personality and influences. He said ‘If it’s weird, it’ll probably work, and chances are it’ll be new.’ Be yourself, he pointed out, and your work won’t re-tread old ground. I think that was probably the single most useful and interesting thing I heard during that brilliant day on which I learned so much, and it was the best point at which to finish my journey through the CBI Conference 2013. Stay true to yourself, stay the course, go with your gut, give it everything you’ve got and believe in your work – I took all these nuggets of wisdom away from the day, and I’m very grateful to all at CBI and all the speakers and presenters for such a fantastic conference.

As well as that, it was beyond words to spend the day with people – so many people! – all of whom share my passions and dreams, are interested in the same things I am, and who love children’s books as much as I do. Next year, though, not only will I attend both days of the conference instead of just the first, I’ll also be brave enough to say ‘hello’ to more people; hopefully, I’ll feel like less of a pretender, and more of a professional! Despite my own shyness, however, I couldn’t have wished for a more inspiring experience, and I can’t wait for the 2014 CBI Conference. 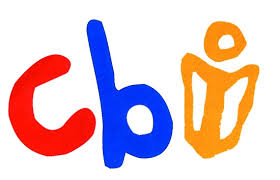