Good morning, world. I’m here in my kitchen baking (again), and the radio is playing as I work. The DJs are asking listeners about movies and memories from their childhoods, and it’s got me thinking about my first memory. Well, at least, what I think is my first memory.

When I was born, my parents had just bought our house. It was right beside my dad’s mother’s house, and it was (probably) about a hundred years old. It was in a terrible state of disrepair and neglect, and (spookily) the last owner was an old lady who had died in the house. So, my parents (who were so young… so much younger than I am now!) decided to knock the house and rebuild it. Meanwhile, our little family lived in a mobile home in what is now my parents’ garden. I’m convinced that not only do I remember the back wall of our house as it was being built, but also the kitchen area of our mobile home, and I consider this one of my earliest memories.

My parents tell me there’s no way this can be the truth. I was barely sentient, they say. I was a mere blob of flesh with an appetite and very little hair. How could I possibly remember these things?

I’m also sure I remember our street the way it looked when the house had been demolished – it was like a row of teeth with the middle one missing. To remember this, I must have managed to haul myself up to a sitting position and peer out of my pram, goggling in that particularly unfocused way that only babies and the very drunk have ever mastered. Even I have doubts that I managed to do this; yet, the memory remains.

I also remember (I tell myself) sitting on the floor of our kitchen playing with the pots and pans. My mother has told me I did do this, but I feel the picture I have of it in my mind is more influenced by a photograph than it is by actual experience. I see this memory as though I was outside my own body, so I was either an experienced astral projector at a young age or I saw a picture of this at some stage and have convinced myself it’s a memory. It looked a bit like this: 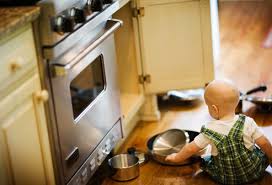 Most of my childhood memories are sort of like that, though – almost like photographs. I have a memory of walking back to my aunt’s house with no shoes on one very hot summer’s day when I was about six, but I see it like a snapshot of myself taken by someone else. No such photo exists though, because I was definitely on my own at the time. I remember the first time I saw a girl who would later turn out to be one of my best friends – it was on the day of our First Holy Communion, so we were about seven. It was like my mind took a photograph of her as she left her pew, resplendent in her beautiful white gown, to approach the altar; I wouldn’t actually meet her till the next school year, when we were placed sitting beside one another, but this memory of my first sight of her is very clear. I still don’t know why my mind decided she was important, and worth taking note of, before we’d actually met – perhaps, as well as being an astral projector, I’m also a bit psychic. Or something.

The first film I remember seeing in the cinema was Bambi. This doesn’t mean I was, in fact, born in 1942 – it must have been an anniversary showing, perhaps. I am old enough, however, to remember when smoking was still permitted in cinemas here in Ireland; my memories of watching Bambi take place through a haze of cigarette smoke. I also remember (patchily) watching E.T. the same way. I went to both these movies with my dad, and he still likes to tell people how I babbled about stars and aliens and little men in the sky the whole way home after we’d been to see E.T. I think it’s one of his favourite memories of me.

Whether or not my memories are actually memories, or just mis-remembered photographs, I still treasure them. My parents were great photography enthusiasts when my brother and I were young, and we have a wonderful store of images to look back on – and they’re not just pixels on a screen, either. They’re actual photographs, in a collection of biscuit tins, yellowed with age, varying in size as the cameras changed and modernised through the years, and I love them all.

Anyway, time to come back up memory lane now! My cake is cooling on the rack, and it’s time to move on to my next task of the day. I hope you’ll share some memories with me in the comments below, and that you all have wonderful days today.

P.S. I won’t be blogging tomorrow as ‘real life’ is interposing again – I’ll tell you all about it next week. Hold tight till then.