Can I just say how much I giggled at this morning’s Google doodle? I might even have air-punched, just a little bit.

Instead of following its own colour-coded design, this morning Google used a rainbow pattern, presumably as a comment on the controversy raging over the Sochi Winter Games and the statements made by the Russian government regarding gay people over the last few weeks. I, for one, think this is amazing. The Google doodle, that is, not the ignorant comments. Surely the spirit of the Olympic Games is one of unity, sportsmanship, peace and equality?

So, what part of that means excluding gay people?

I hope the Games take place without incident, without violence, without shows of hatred. I hope they highlight the ideals of fair play, equality between nations and peoples, and the unifying power of sport. I hope they show the world how great human beings can be.

In this vein, this morning’s Flash! Friday challenge was to take this wonderful image:

and the prompt word ‘envy’, and craft a story around them. The kicker? As with every Flash! Friday challenge so far this year, the story had to be between 140 and 160 words. Easier said than done.

So, I came up with this:

The Spirit of the Games

He passed through the throng unseen, trying to understand. A huge, hard-packed racing ring led into the unknowable distance. Tiers of chattering people – even women – rose high all around. Unfamiliar flags fluttered overhead. That particular feeling – the only thing he recognised about this place – was in the air. Expectation. Competition. Conquest.

But where were the offering fires? The temple to Zeus?

‘Stop!’ he instructed a passerby, but the command was ignored. Confused, he looked down at himself, oiled and ready. He was unused to being overlooked, accustomed more to greedy stares, flashing hatred, raging jealousy. He thrived upon it. It drove him to win.

But where should he go? There were no slaves to direct him. He could not see the athletes’ enclosure anywhere.

Then, a cheer rose from the crowd. He turned. A group of men, oddly dressed, thundered toward him.

But they passed through him, scattering his shade to the gods.

I’m off to stretch my writing muscles, oil up my typing fingers, and get my brain around the high-jump of my MS of ‘Emmeline.’ I started inputting my ‘final’ edits yesterday, thinking ‘Oh, yes! This’ll be a breeze. No problem whatsoever. I know exactly what I want to change, and I’ll get through them in about an hour.’

Of course, what has happened is that every sentence I read has something in it that needs tweaking. Just slightly, but enough to take up precious cogitatin’ space.

As Captain Oates, my dear old friend, once said: I may be some time.

When you encounter a book you like, do you do what I do and Google the author’s name? 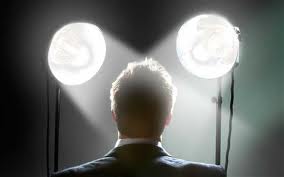 He *what?* A citation for not eating his lunch in kindergarten? Awful!
Image: telegraph.co.uk

I have to admit to being quite a nosy person. I’m interested in the minutiae of other peoples’ lives, like what they dreamed of being when they were young or what their favourite smell is, or how they feel about string. This is why Google is both the best thing in the world, and the worst, for a reader like me. It’s all very well when the author you’re Googling is someone like Neil Gaiman, who is unspeakably cool in every respect and whose every fleeting thought is a masterpiece (allegedly); what happens, though, when you absolutely love a book but then discover that its author was – or is – a raging misogynist or a self-confessed homophobe or a murderer or someone who really, really doesn’t like string?

Should it even matter? Should our feelings about the life of an author have any bearing over their work at all?

During the past week, there was a celebration of the work of V.C. Andrews over on the-toast.net. A whole day was given over to the work of Ms. Andrews, an author whose name sets of tingling thrills up the spine of most readers of my vintage, and I was delighted to see such kitschy pleasure taken in her work. I, like most people I know, was fascinated with Andrews as a teen: her work took me to a weird place which was almost magical-realism, almost something far more frightening and adult and distasteful, yet somehow compelling. My favourite of her novels was ‘My Sweet Audrina’, a book which gave me nightmares for years but which was also, in a strange way, like an addictive drug. 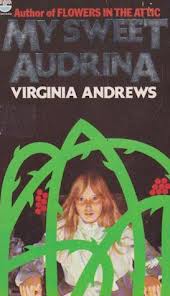 This was what the cover of my edition – I mean, someone else’s edition – looked like.
Image: goodreads.com

After I’d had a good old browse through the Toast website and realised I was far from the only Audrina fan out there, I decided to do my usual thing and Google the author. I’d never thought of doing this for V.C. Andrews before, mainly because it’s been the best part of two decades since I’ve read anything by her, and what I found was almost as weird as anything you might come across in her novels. Following a childhood accident, where she fell down a flight of stairs, Andrews had unsuccessful spinal surgery which left her with crippling injuries. She lived the rest of her life in pain, confined to a wheelchair a lot of the time. One interview with her editor recounted how Virginia sometimes needed to be strapped to a board, and was often reliant on her mother’s care. When you consider that her novels are famous for featuring children who were kept captive and who had complicated relationships, to say the least, with parents – particularly grandmothers and mothers – her ‘real’ and her ‘fictional’ lives take on a poignant sheen.

I think my new knowledge about Andrews and the reality of her life will affect the way I think about her work in the future; whether it will enhance my experience of her writing, or detract from it, remains to be seen. She’s not really an author I read much any more, so perhaps it’s a good thing that I only learned about her life now, and not as a younger fan. I’m glad I got to experience her books for myself, free of any knowledge of their creator. I was fascinated to learn about her on another level, though, because Andrews’ life was remarkable in a lot of ways: not only did she implicitly understand what it felt like to be ‘in captivity,’ but she was also a very successful commercial artist and fashion designer prior to her writing career. Perhaps it’s no wonder her novels have this soft-focus, hypnotic quality, like you’re reading them through a layer of tulle; in them, one could say, we’re reading Andrews’ dreams for her own life.

So, sometimes Googling an author can be interesting. Having said all this, of course, it’s not for me or anyone else to say how much influence Andrews’ life had on her work; in a way, it’s not fair to speculate. As a human being, though, I can’t help it. It’s one thing to find out that a person whose books you love struggled with ill-health during their life, but what do you do when Google uncovers something far worse? When you come across an author who holds abhorrent personal views on something you hold dear, or who you discover was a rather nasty person, does it affect the way you read their books?

A prominent SF author has recently declared his opposition to marriage equality and his stance on President Obama’s administration (he’s not in favour, to say the least). His criticism is a little off-the-wall, to my mind, and he’s receiving a lot of flak from readers and non-readers alike. I, personally, am a fan of this author’s work, but I’m not sure whether I’ll be able to read it with the same pleasure now as I used to. I’m also not sure whether this is fair – everyone is surely entitled to their own opinion, however much it may differ from mine, and an author is entitled to write about whatever inspires and excites them – but is it really so strange that I’d find my mind straying to what I know of the author while I read his work?

Maybe it’s just me. Perhaps my innate nosiness leads me into places I shouldn’t go, and I’d be better off not researching the lives of the authors I love. I should read their work in the bubble of ‘separateness’ from the rest of the world in which they were created, and – no doubt – in which they were intended to be read.

We’ll see how long that lasts.