The Black Book of Secrets, F.E. Higgins’ debut novel (first published in 2007 by Macmillan Children’s Books) is a strange beast. It’s one of those books which grips the reader so hard at the start that you read on in a frenzy, desperate to find out what happens – but then, things sort of lose their momentum three-quarters of the way through. This is a real shame, because the book is so richly imagined and written – Higgins’ style reminded me of Frances Hardinge’s, in several places, and it’s unsurprising that they share a publisher – but for all that, I found myself vaguely disappointed with it, overall. 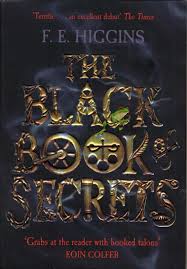 There’s a lot to love about the book’s opening. We meet Ludlow Fitch, a street urchin who lives with the most horrendous ‘Ma’ and ‘Pa’ imaginable, gin-fiends who think nothing of attempting to sell their son’s teeth (ripped unwillingly from his head!) to fund their drinking habits. Ludlow is accosted by his parents, dragged into a cellar, and faced with a terrifying ‘dentist’ bearing a large pliers, who is ready to relieve him of his chewing equipment – until, of course, he bravely fights his way to freedom, desperately clinging to the side of a passing stagecoach as it leaves the City in which he has lived his whole, miserable life. The coach brings him to the town of Pagus Parvus, where he fortuitously meets a mysterious man named Joe Zabbidou (the names of the characters and places in this book are a delicious, word-lovers’ marvel), and he soon falls under Zabbidou’s wing, becoming his assistant.

But what, exactly, does Zabbidou do? (Sorry – I couldn’t resist. Zabbidou-do-do!)

Ahem. Well, it appears that Joe Zabbidou makes his ‘living’ (if you can call it that) by buying people’s secrets. He is a Secret Pawnbroker, which is to say not a pawnbroker whose shop is hard to find, but a pawnbroker who pays good money for the deepest, darkest shreds of guilt in every human conscience. He asks people to tell him their secrets, and then Ludlow writes them down in the eponymous Black Book. What for? We don’t know. Where does he get the money to pay for all these secrets? We have to wait (a long time) to find out. How does a half-literate Ludlow suddenly become Zabbidou’s scribe, faithfully and quickly transcribing everything he hears? Er… well. Next question!

And this is the problem – or, one of them – with the book; too many unanswered questions. There’s a nifty conceit behind the story, which is this: Higgins inserts herself into her own novel, pretending to be a person who came across the fragmentary remains of Ludlow Fitch’s memoirs (she does, in all fairness, say that she corrected Ludlow’s dreadful spelling throughout, but I still don’t think this explains his ability to write so accurately), filling in the gaps with her own imagination to tell his and Joe Zabbidou’s story, but I wondered if this was necessary. We’re left wondering why Ludlow wrote his memoirs, for what purpose, why they ended up in a hollow wooden leg (the significance of which isn’t explained, but there is a sequel to this book, so it may well appear there), and what on earth made him so attractive as an apprentice to Joe Zabbidou. For one of the things I didn’t enjoy about this book was the fact that I didn’t have strong feelings, either way, about Ludlow himself. He’s an observer throughout, who – at least, to my mind – could have been lifted out of the plot without any discernible effect. He doesn’t do much (besides his breathtaking, and brilliant, escape at the beginning), and he sounds like an elderly Dickensian character throughout. Having said that, the language is fantastic, and the imagery is memorable, and the rhythm of the sentences is perfect, and the dialogue is sharp and witty, and I couldn’t fault the way this book was written – it gladdened my word-loving heart.

But, at one point, Ludlow makes an observation that he, Zabbidou and Polly (the maid to the local landlord-cum-oppressor, the baddie of the piece, Jeremiah Ratchet) were simply sitting at home, waiting for something to happen. That’s how I felt, at times, reading this book. Zabbidou was the hero, around whom the action was centred; Ludlow, our narrator and focus, was sidelined within his own story. The explanation at the end was comprehensive, certainly, and things fell into place, but I was still left with a feeling of ‘is that it?’

F.E. Higgins is certainly a great writer. I loved the way this book was written, and the world it created. I loved the descriptions of the City and Pagus Parvus, the houses and the foodstuffs and the clothes and the cobbles in the streets. I loved the details lifted from history – the Resurrectionists, the suspicion about where the meat in your pies was coming from, the fear of being buried alive – and I even liked the overall point behind the plot, that of the ineluctability of fate itself and how the smallest decision, or the smallest character, can be an instrument of Destiny. But because I couldn’t warm to Ludlow (he didn’t give me a lot to warm to), and the plot was somewhat meandering, and the religious symbolism was a little overdone, I think this book would be a middle-ranker, for me. Certainly, it’s worth reading for the richness of the language alone, and it’s a masterclass in subtle but effective description – but I can’t help feeling it could have been more. I’ve read synopses of Higgins’ newer series, The Phenomenals, which sounds, well, phenomenal, and so I think I might be inclined to try those next. Certainly, I don’t think the sequels to The Black Book of Secrets are for me, but I haven’t given up hope yet!