Knowing something is going to happen, I’ve found, doesn’t seem to make it any easier to bear when it eventually does. I – along with all of Sir Terry Pratchett’s millions of fans across the world – have followed his struggle with Alzheimer’s disease over the past eight years, willing him on (for as long as he felt able), wishing him well, sending him strength and courage and hope.

But we all knew that one day, probably sooner rather than later, ‘the embuggerance’ (as he called his illness) would wear him down. Yesterday was that day. 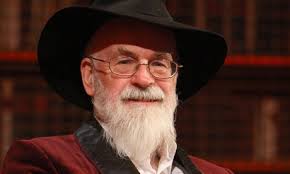 I learned of his passing on Twitter, which seems inappropriate somehow. I don’t know why. It seems impersonal, maybe; like the knowledge was second-hand. Terry Pratchett has been a part of my life for almost thirty years. I feel like I knew him personally. I feel like he was a dearly beloved uncle, one guaranteed to make you giggle at the most inappropriate moments, bound to make salacious comments over the vegetables at Sunday dinner, and the first to get up on a stool with a flagon in his hand and regale us all with verse after verse of Nanny Ogg’s famous ballad, ‘The Hedgehog Can Never Be Buggered At All.’ His smile, and his ever-present black fedora, are as familiar to me as the faces of my own family.

I can’t explain why he was so important to me. I loved his books, certainly. I loved his characters – his strong women, Nanny Ogg and Granny Weatherwax, Tiffany Aching, Anathema Device, even Magrat Garlick, who is strong in entirely different ways to the others; his complex men, like King Verence of Lancre, Captain Carrot of the City Watch, and the incomparable Sam Vimes, and I adored the stories and the worlds  he created – but it’s more than that. It’s the fact that you can pick up any of his books, at practically any page, and read a paragraph or two, and if you haven’t either laughed, learned something new or been flattened by an amazing image or perfectly constructed sentence by the time you get to the end, then I’ll be the guy in the corner with a bladder on a stick. Terry Pratchett was not university educated, but I learned more from reading his books than I did from any university course I ever took. Every page was packed full of allusions, inferences, puns (or ‘punes’, for those in the know), and jokes which, sometimes, only made sense years later. I often had the experience of reading something in a textbook and realising, with a start, that I’d come across the idea already in a Pratchett novel – I just hadn’t known it at the time. I have been, and I’m sure I’ll continue to be, amazed on a regular basis by just how much world there is in his books – not just the fictional worlds of his immeasurable imagination, but of our world, too. His was an intellect rarely matched.

I wept for him yesterday, and I’m sure I’ll weep for him in the future. I can’t read the final few Tweets on his official timeline (@terryandrob) without blinking back tears, because they are so perfect. They are heartbreaking, but they couldn’t be more suitable. I’m staggered with admiration for Sir Pterry’s daughter Rhianna, who wrote the Tweets, and who pushed through her own terrible grief to share the news of her father’s passing with all of us who did not know him, but who loved him all the same. I know I am part of a huge fandom, almost a family, and that is a huge comfort. I know I’m not the only person who wept for Terry Pratchett yesterday, and I know that he will be remembered for many years to come. In his own words:

No-one is actually dead until the ripples they cause in the world die away. (Reaper Man)

By that Pratchettian logic, Sir Pterry will be with us until the end of time, and for that, and for his words and stories, I am truly glad.