I’m not sure why I get so emotional around this time of year. The closer it gets to Armistice Day, the more my heartstrings swell at images and footage of people all over the world paying their respects to their war dead, and remembering their own experiences of war. Clearly (although I’m old) I wasn’t around during the war and Ireland was (notionally) neutral during WWII, so I shouldn’t have a huge connection to any sort of commemoration service. 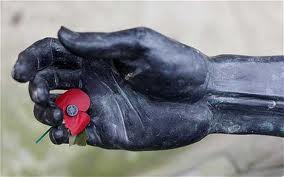 I watched a special programme aired by the BBC over the weekend in which a man who is now eighty-eight years old returned to the beaches of Normandy where, as an eighteen-year-old, he had landed with his compatriots in an attempt to liberate German-occupied France. He described his journey toward the beach, and how the fear of what awaited them was almost outweighed by the seasickness caused by the rough waters; he relived the feeling of the flat-bottomed vessel making landfall and the knowledge that nothing but his own speed and agility would save him as he raced up the beach toward the German lines, with bullets zipping – like ‘a load of birds singing’ – past his head.

He recalled picking up the bodies of his fallen comrades once the battle was over, boys of seventeen and eighteen years of age. ‘They never had a life,’ he said, gazing around the beach, and he wept, remembering his friends, boys he had trained and fought and laughed with, all of whom gave their lives in order that future generations might be free. I wept too, because there was something so deeply moving about a man of such age and experience demonstrating how the pain of war never truly leaves you, and how the memories of what you experience during a time like that are always there, just beneath the surface.

It also made me think about the terrible loss of life, and the unimaginable sacrifice offered up by so many hundreds of thousands, without which none of us would be living the life we have.

It’s such an easy thing to forget, the suffering of generations gone before us. I often wonder whether the world we have created is something that a fallen soldier from the Great War or the Second World War would be proud of. ‘Yes – this was worth dying for. This world is the perfect Utopia we dreamt of as we crawled through the muck of the trenches or fought hand to hand in the villages of France.’ Is this what a soldier would say if it was possible to bring him back for long enough to take a look around? I’m not so sure.

I wish there was no need for war, and I certainly wish humanity would stop fighting and killing one another over things like natural resources and money. Fighting for freedom and liberty, the right to live without the burden of tyranny, fighting to save your country from the oppression of an aggressor – that, I can do my best to understand. Without wishing to malign any country’s serving military, I nevertheless have to say that I think some of the wars being fought in our modern world are a lot harder to comprehend. Then, the average soldier has very little to do with the causes behind a war – he or she simply does their duty, and to the best of their ability.

Having said that, any man or woman who gives their all in the service of their country deserves to be respected and remembered, and perhaps it’s my innate pacifism that makes me so upset and sorrowful each Remembrance Day.

My thoughts are also with all those thousands of people killed, injured and left destitute by Typhoon Haiyan in the Philippines. It makes me very sad, and angry, that it’s almost always the people who have the least who suffer the most during natural disasters, and I can’t help but think that climate change – which is, almost always, nothing to do with the people who suffer as a result of it – has a role to play in the terrible weather events of the last few years.

All in all, it’s a time for reflection and togetherness, and an opportunity to honour the memory of the war dead – who fought for what we now have – by helping one another, and doing our best to create a world they would be proud of.

Try to spread a little kindness today, in whatever way you can.