S. F. Said is quickly becoming one of my auto-buy authors. His previous works, Varjak Paw and The Outlaw Varjak Paw, are beautiful adventure stories about discovering one’s own inner strength and learning to rely on friends (themes I love in children’s books), and his newest book, Phoenix, takes a look at some of the same issues, but in a vastly different way. Instead of the back alleys of a frozen city, seen from a cat’s-eye view, we have the most massive canvas of all opening up before us – the galaxy itself. 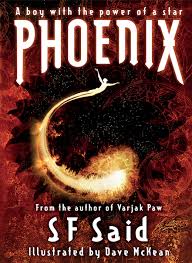 This book tells the story of a boy named Lucky who lives with his mother on a planet named Phoenix. His father, a famed military captain, is far away beyond the Spacewall fighting against the terrifying Alien race known as the Axxa, but despite this he seems ‘present’ in so many ways, as he is rarely far from Lucky’s thoughts. As the story opens, Lucky is dreaming. He feels himself soaring into the immensity of space, surrounded by stars, and an unknowable power begins to stir inside him – but when he wakes, he finds his clothes and bedsheets turned to ash. His mother reacts with terror, and a strange sort of foreboding, as though this was something she knew was going to happen one day, but she won’t explain what’s going on to her terrified son.

They go on the run, but in their efforts to leave Phoenix they are stopped. In the ensuing struggle, Lucky realises his mother is not everything she appears to be, and he barely escapes with his life. His unlikely rescuers? A crew of Axxa civilians, who agree to take him with them, anywhere but Phoenix. And so begins Lucky’s quest, not just across the galaxy, but also into the secrets which have surrounded his entire life. Are the Axxa really as bad as he’s been led to believe? Who, exactly, is his mother, and where did she get her jaw-dropping military skills from? After all the waiting and wondering, is his father really somewhere behind the Spacewall? And why does he feel, in his dreams, as though his entire body is filling up with the power of the cosmos – and what does it mean?

This book is immense. It’s a work of art. Stuffed full of the most beautiful drawings by acclaimed artist Dave McKean, who also brought Varjak Paw to life, it’s a memorable and moving intergalactic journey, the epic scale of which is mirrored in microcosm by Lucky’s internal voyage. He goes from being a lost and scared little boy to a person of such strength and self-belief by the story’s end, and the final few pages of this beautifully realised book are just perfectly imagined and written. As he travels across the universe in the company of his newfound friends, meeting Startalkers (people with the ability to ‘hear’ and communicate with particular stars, feeling what they feel) and prophets, Aliens and Humans, fantastic creatures and terrifying enemies, Lucky learns how much he has been kept from all his life, and how hard his parents tried to protect him. But, of course, as with all stories like this, he has to shuck off the mantle of protection and begin to take responsibility for himself, making his own decisions and coming to his own conclusions – and he does all this in style. He learns the secrets of his father’s astrolabe (a feature I loved), which is a mysterious navigational tool with the power to show its user the best route through the immensity of space to any point they wish to reach (and we finally find out why, whenever Lucky asks it to show him how to get to his father, it takes him off the ‘edge’ of the map, something which nobody had believed possible), and he gradually comes to terms with the depth and significance of his cosmic power.

The book has a deep ecological resonance, too, reminding its readers that we cannot simply take and use the natural resources offered to us (even on a galactic scale) without responsibility, as no matter how seemingly endless it appears, eventually every natural resource will become tapped out, and the result will be death for everyone. We learn about the ‘Wolf’ which is eating the stars, and the terrible toll this takes on the Startalkers, who must fade and die as their stars do. The myth of the Astraeus, the twelve immense beings – older and greater than gods – who live among the stars threads its way through the narrative and the art, and the huge themes of rending and destruction are counterpointed by Lucky’s realisation that, underneath it all, every living thing is the same, and Axxa and Human alike are more similar than different. He finds and loses love; he finds answers he didn’t know he was looking for. And eventually, he becomes the sort of man he could never have imagined.

S. F. Said is a hugely vocal advocate for children’s books and their power and value. His own work, Phoenix foremost, is a perfect example of what he’s talking about. This book is beautiful, imagination-grabbing, filled with themes of such scope and immensity that it simply has to be written for children, because it would be wasted on adults. As an object, this book gave me so much pleasure; it’s not just the story, which is good enough by itself, but the illustrations, which added to its visual and sensory appeal. It’s immersive and captivating and memorable, and one of my books of the year – in fact, probably one of my favourite books of all time. I heartily recommend it, for every child in your life.

This will, more than likely, be my final book review of 2014. It’s wonderful, then, that we’re finishing things on such a high note.

For this week, it’s the turn of The Outlaw Varjak Paw, by S.F. Said. 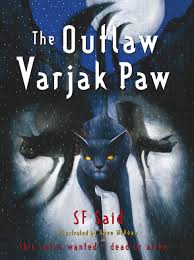 You might remember me reviewing the first book in the Varjak Paw sequence here, and how much I loved that story, too; I can safely say that Outlaw, the sequel, consolidated and deepened my love for this brave, plucky, loyal little cat and his band of followers. It’s almost enough to make me a fan of cats in real life, and that’s no mean feat.

The Outlaw Varjak Paw picks up Varjak’s story shortly after the events of the first novel. He has been fully adopted by the city cats Holly and Tam, and their steadfast dog companion, Cludge, has become a vital part of their gang. As the book opens, they are heading to the city dump to search for food, for the city is locked in a cold winter and there is nothing to eat. Sally Bones’ cats have begun to extend their ‘zones’, grasping at control and dominance that isn’t theirs to claim, and meting out fierce and dreadful punishments on any cat who dares to cross them. The traditional hunting grounds and ‘free zones’ have now become no-go areas – unless you want to face the legendary wrath of Sally Bones, of course.

So what’s a cat to do when Sally Bones, the most fearsome cat in the city, is on your tail because she knows you have the same power she does, or a version of it at least – access to the Way of Jalal, the secret fighting techniques that render a cat unstoppable in battle? Varjak has been taught the Way by his ancestor Jalal, but he knows that somehow Sally knows the Way, too, and is far stronger and more accomplished than he is. The terrorised cats of the city, living in fear of Sally Bones, begin to turn to Varjak as a saviour – but is he ready to carry that burden?

When Sally Bones’ cats take a prisoner from among Varjak’s new friends, a young kitten named Jess, he knows he has no choice. He must risk certain death by going right into the heart of Sally Bones’ territory to do the impossible, which is to reclaim a hostage; everyone knows that once Sally Bones has you, you’re never seen again, but Varjak has no choice. Jess and her family defied Sally Bones because they believed in him, and they have paid a terrible price. He’s not about to let them down.

His journey to Sally Bones’ lair leads him through terrifying tunnels where he encounters both strange cats and dogs he must learn to trust, and into the darkest ‘night of the soul’ possible, when he fears he has forgotten the Way completely. Can he fight not only his enemies, but also the darkness and terror which sap his strength and self-belief – and can he make the city safe for all his friends, feline and canine alike?

Well. This book is beautiful. Not only because of Dave McKean’s amazing line-drawings, similar to the ones he did for Varjak Paw, but because of the lyrical language and clear description and settings which are easily imagined (made extra delicious by the fact that there are no people in this very built, urban environment), and by the depth of psychology and complexity which Said brings to the character of Varjak Paw, and the animals with which he shares his story. The ‘lessons’ Varjak learns as he lives out his adventure are emotionally affecting, and the highs and lows of his quest are so gripping that they definitely carried this very human reader along. I loved all the characters, particularly Sally Bones who is, most definitely, one of the most effectively chilling and creepy villains I’ve ever had the (dis)pleasure of reading; her ice-blue eye will haunt my dreams, I fear. Of course I loved Varjak, and his brave Holly, and the sparky Jess, and the immensely courageous Mrs Moggs, and the unstintingly loyal Cludge (who has, let’s face it, simply the best name of any literary dog. Ever).

I’m not sure who I’d recommend this book to. It’s a wonderful story for readers of eight or nine onwards, but there is quite a lot of fighting, and in every battle scene at least one valiant combatant loses blood. There’s description of claws and slashing and injury, but I’m sure it’s not too much for even the most sensitive of readers, though parents may want to read it first just to make sure. This is a book which should appeal hugely to its target middle grade market, but which will keep readers of any age enthralled and invested in its defiant, justice-loving characters. Varjak Paw is definitely settled as one of my all-time literary favourites, and I’m sure I’ll revisit his tale many times.

Happy Christmas, everyone, and all best wishes for the start of a brand new year.