The older I get, the more I enjoy this ‘holiday’, if it can be called that. I have had my little goodie bags wrapped up and ready to go for almost two weeks, awaiting our hordes of teeny tiny callers later tonight, and we have actually decorated the house this year. I know, I know, we’re falling for the hype – blahdiblah – but really. What does it matter if we’re helping a few local kids have a good time? Not to mention, of course, that it’s a whole lot of fun for us, too. Last year we had a tiny speck of a child, barely able to totter on her little feet, dressed up as a pumpkin. A pumpkin. I have yet to see anything cuter. (She got two goodie bags, but don’t tell anyone.)

Before all the fun begins later tonight, though, I have a lot to do. I am still trying to work out a story for the Walking on Thin Ice Short Story Contest, which I may have mentioned once or twice in passing (have you entered yet? Get on it!); writing my entry is proving a little more complex than I anticipated. I’m not sure why, because the theme is something about which I feel strongly. Perhaps, indeed, that’s the problem – I am too emotionally invested in the idea of mental health, and the oppression of those who suffer due to their mental health. I want to write a story which is authentic and which says something, not only about me but about the ethos of the competition, and it’s not as easy as it looks. I’ve written two stories now, and drafted them both at least ten times, but they’re still not right.

Anyway. Tomorrow is the start of NaNoWriMo – which is terrifying and brilliant in equal measure – and I’ve been thinking a lot about my project over the past few days. I’ve managed to plot out a little more of the story, but there’s still a huge Terra Incognita in the middle, between our heroine’s dramatic escape and the tension-filled dénouement; I’m hoping that the story will tell itself as I go. It’s a foolproof plan. It couldn’t possibly go wrong. Right?

One thing I do not have yet is a title for this new opus.

THE CREATURE IN THE NORTH

Too general? How about…

THE WHITE FLOWER AND THE FROZEN GOD

Too long and complicated? Sheesh. Coming up with titles is thirsty work.

If you have any suggestions, let’s hear ’em. You might have guessed that the story will involve ice, north-ness, and frozen stuff. Oh, and a little girl called Emmeline Widget, just because.

Good luck with your entries for the Walking on Thin Ice Short Story Contest (I haven’t forgotten, you know), and with everything else you may be getting up to on this fine autumnal Thursday. I hope you have a scarily wonderful day!*

*Apologies. I couldn’t resist. Have a great day, if you prefer.

Happy Hallowe’en! As I write, it’s dark as pitch outside and the rain is battering the windows. It’s the perfect setting for writing about this, the scariest time of the year. I hope you like my blog’s ‘new look’ – thanks to my wonderful husband who redesigned the colour of my banner image, and added the cutest… I mean, most terrifying bat I’ve ever seen. It’s my little celebration of the day when the worlds begin to slide into one another, and you never know what’s waiting for you around the next corner…

I’ve always loved Hallowe’en, even in the years that have passed since I grew too big for ‘trick or treating’. I didn’t have much imagination back when I was young enough to be able to get dressed up and go around terrorising the neighbours, I’m afraid to say. I was usually a witch, because there were always long skirts and spooky-looking scarves lying around at home, so it was a very easy costume. We didn’t even call it ‘trick or treating’ when I was young – I’m not completely sure whether we even had a name for it. I have a feeling it rejoiced in the name ‘going around for Hallowe’en’, which definitely has less of a ring to it! I just remember it being great fun, and I recall the frisson of terror that would run up my spine every time we rang a doorbell, particularly when we didn’t know who lived there. We would be ushered into living rooms and kitchens and urged to do a dance or a ‘recitation’ of poetry in order to get a few coins, or a handful of nuts, as a reward. It was rare that we got things like sweets or chocolate – we would be far more likely to come home with our swag-bags laden down with apples than with sugary treats. It makes sense, as Hallowe’en probably has roots in harvest festivals and celebrations relating to the goddess Pomona (the goddess of fruit and/or fruitfulness, and possibly apples – I’m not completely sure any more!), but I didn’t have this scholarly perspective when I was a kid, and I often felt short-changed as I munched through my pile of Granny Smiths. It’s funny, now, that I’m on the other side of the whole ‘trick or treating’ thing, that I make such a big deal out of it. I spent nearly an hour yesterday making up little ‘treat packs’ for our local children, ready to be handed over when we are, inevitably, deluged with visitors as soon as darkness falls. I’m really looking forward to it. Nothing is more lovely than seeing the local kids all excited and dressed up. I’m just hoping I have enough packs to cover everyone – a couple of years ago, we ran out of goodies and my husband and I had to cower in the kitchen with the lights turned out until the doorbell stopped ringing. That was fun. 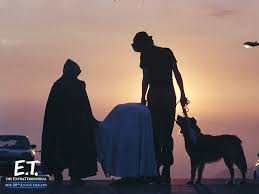 I’m thinking about scary things today, of course, and I wanted to muse a bit about frightening films versus frightening books. I’m not sure if anyone else is like this, but I find that I’m completely unable to watch scary films. I have zero tolerance for them. One of the best photographs of me as a child is one that was taken during my first viewing of the movie ‘Jaws’ – I’m basically clutching a pillow to my chest and peering over the top of it, regarding the television with an expression of pure terror. ‘Jaws’ is a film I consider to be scary, but it’s not a ‘horror’ film, as such; when we get into the territory of horror, I just can’t do it. You might remember a few weeks back I mentioned that I’d watched ‘The Woman in Black’ and almost lost my life in the process – all this, despite the fact it’s generally considered a film so un-scary as to be funny. Even my mother, who normally shrieks at shadows, laughed her way through ‘TWIB’. I, however, could not sleep afterwards, and had to leave my bedroom lights on all night, much to the amusement of my family. I’ve seen ‘The Exorcist’ because a friend basically forced me to, and I watched ‘Poltergeist’ when I was younger before I really knew what I was getting myself in for. However, that’s about it for classic horror movies. I particularly can’t handle anything that involves possession, or demons, or monstrous psychopaths (Freddie Krueger, for instance), and I also can’t cope with anything that involves young children coming to harm. (Now that I think about it, I’ve also seen ‘The Others’, which nearly made me lose my mind because the little boy in it looks just like my brother did when he was young, so I can’t help but feel the movie is about my brother – yes, I’m weird). 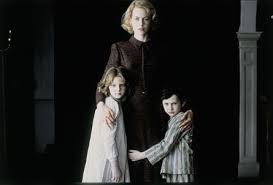 Well, my brother was a bit less pale and strange-looking, but the general outline is similar. Anyway.

However, when it comes to scary books, I’m a different animal altogether. Scary books, I can usually handle. I’ve read all of John Connolly’s novels, which are pretty spooky, and feature not only murder but also a lot of supernatural goings-on, including ghosts and fallen angels and the lot. I can read Stephen King, but I can’t watch adaptations of his work. The book I’m currently reading, ‘Kraken’, is full of scary bits, which I have no problem with. If I even wanted to get picky about it, one of my favourite books is Henry James’ ‘The Turn of the Screw’, which is similar to ‘The Others’ in so many ways; I love the book, but can’t handle the film. I’m wondering why this is, and I think the secret lies in control. I feel, when reading a scary book, that I’m in control of the images being created in my mind – I can make them as scary as I’m able for, and if I want to, I can focus on something in the background of the scene instead. I also know I can close the book and walk away at any stage. I’m not completely sure about this logic, though, because usually when a person reads, the mental images are more intense, because they’re so extremely personal. Hmm.

It’s a puzzle, and no mistake. Has anyone else experienced this? Is there a secret trick to being able to watch frightening films that I’ve just never been exposed to?

Happy Hallowe’en – have a wonderful day, whether you’re trick or treating, or doling out the tricks and treats. And stay safe out there!