This has been a long, hard week – in so many ways. Reality (boo hiss!) has prevented me from doing as much writing as I’d like, and the writing I have done has been execrable nonsense. No – really.

As proof, let me proffer the following.

I laboured for hours yesterday on a piece of flash fiction which I had intended to submit to a prestigious competition. Its closing date? Today. Yeah. Not so clever.

Normally, my internal ‘deadline widget’ would keep me from making such a colossal mess-up, but for whatever reason it was on the fritz this week, and so things started to get on top of me. Anyway, after all the hard work of producing this piece of flash – and, for a while, I genuinely thought it was okay – I read it over this morning and realised that it literally makes no sense. None whatever. As well as that, the stuff that happens in it is physically impossible – which I know doesn’t really matter, because it’s a story. However, when the crux of what you’re writing hangs on something that couldn’t actually happen in reality, and the story relies on the events taking place just as they would in reality, then you’ve got a problem.

So, as you can imagine, there’s been plenty of wailing and tooth-gnashing this morning, and the day hasn’t even begun properly.

It hasn’t been helped by the fact that today’s Flash! Friday prompt was cruelly complicated.

All in all, I wonder if today’s one of those days which should just be rebooted. Shame I can’t just Ctrl+Alt+Del and get on with things in a better and more sensible universe.

So, today’s Flash! Friday required element was ‘Vendetta’ – not the word, but the concept. The prompt image was as follows: 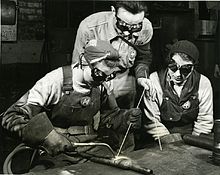 And the following wee bitty tale is what I made out of all that prompty goodness.

I watched them, all three, huddled over Marcia’s workbench. My little buddies. Joe and his fan-club. I shouldn’t have been surprised.

‘C’mon!’ he urged. The glow of Marcia’s torch threw them into sharp relief. Carla was – I guessed – supposed to be on watch, but as always when she got close to the action, she forgot herself.

I took a step closer, thankful for my rubber-soled shoes. I could see the little hairs curling on the back of Carla’s neck now, smell the tang of her sweat. The torch’s hiss covered my approach.

My project – my pipework – lay on Marcia’s bench. She was welding something to the front of it. Something obscene. Something which would’ve gotten me fired.

I should’ve just let Joe do what he wanted, that time. Touch me. Take me.

I raised the wrench, planted my stance, and took aim.

I guess the fact that I managed to get a story (one I’m happy with, too) out of a pair of fiendishly complicated prompts should make me feel a bit happier about my labours. It doesn’t make up for  yesterday’s silliness, but I suppose it’s all about the horizon, isn’t it. No point looking back. Keep going. Stiff upper lip (whatever that means.)

And, thank custard, it’s Friday. Next week I’m going to be machine-like in my efficiency and productivity. I can feel it.

Happy weekend, all y’all. And thanks.